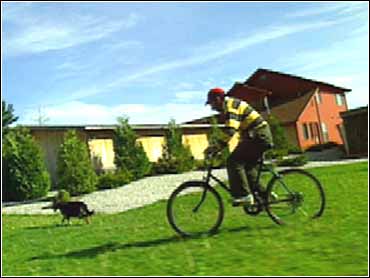 The Christian monk Xanthias once said: "A dog is better than I am, for he has love and does not judge."

You'd be hard pressed to find a group whose members believe more strongly in this than the monks of New Skete, reports The Saturday Early Show. For more than 30 years, they have been showing millions of dog owners that a little divine intervention can be a big blessing.

Visitors to the New Skete Monastery, a mountaintop sanctuary nestled in the hills of upstate New York, retreat into a tranquil world, interrupted only by man's best friend.

Prayer is often put on hold for the monastery's resident majority, German shepherds. For three decades, the monks of New Skete have been breeding and training these animals. While that business provides income, there are spiritual benefits as well.

"The dogs sort of form a pack with us, with all the monks, so it's like one big happy family," he explains. "We all have to learn how to live together, and from the experience of this, we learn the need and the techniques of socialization, which is teaching the dogs from puppyhood on, even adult dogs, how to live with human beings."

Each monk has a four-legged companion: his own roommate, playmate, and dinner mate. While most of the dogs are shepherds, any canine is welcome. The monastery is also a doggy boot camp; $1,000 buys a dog three weeks of personalized training.

These Russian Orthodox monks discovered their second calling by accident. There was no grand plan, just the need for some animal affection in their often isolated lives. Their first German shepherd puppy, Kier, arrived in 1966. When he died, the monks adopted two other pups. Visitors were impressed with the animals and began inquiring about adoption. So, the brothers began studying veterinary medicine and breeding techniques.

"Then," recalls Brother Marc, "eventually some people from the U.S. Customs Service would come and say, 'Can we get some shepherds from you?' And we began working with the different kennels that raise dogs for working with the blind, and it just snowballed."

The monks quickly branched out into training all breeds. They now have two best-selling books, a video and a Web site.

Their mantra: Respect the dog.

Says Brother Christopher, "The dog is not an object, a thing to have. It's, rather, a living being that has the capacity to interact with us in a very wonderful and endearing way."

From birth, the puppies are cuddled to encourage healthy nervous systems. Days after birth, they are put through the thermal stress test. This requires removing then from the warmth of the litter and taking them into a cooler, unfmiliar environment. The monks believe this strengthens the dogs' nervous systems. Along with common commands, basic instruction includes leash training and the importance of body language.

Advises Brother Christopher, "You can't have a successful relationship with a dog if the dog is competing with authority. And, so, we tried to show in both books as well as our videos how to exercise that leadership in a humane and sensible way."

And Brother Stavros: "Simply make a dog an extension of yourself but learn that it's a being as well. Dogs are, by their domestic nature, good companions, but to bring out the best, you have to respect the dog."

Some New Skete visitors think that respect has possibly gone too far when they see canines in church. But the monks of New Skete wouldn't have it any other way. They see the dogs as their spiritual ambassadors.

But the New Skete shepherds don't come cheap. Puppies sell for $1,300. Even if your wallet can handle it, you'll have to wait a while. The monks can train up to four dogs at once, and they're not accepting any new applications until next March.

For more animal stories, visit the YOUR PET section.