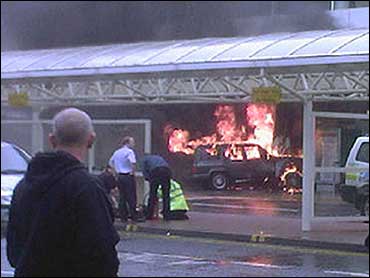 This column was written by Irshad Manji.

This week, two very different Brits had their say about the latest terrorist plots in their country. Prime Minister Gordon Brown told the nation that "we have got to separate those great moderate members of our community from a few extremists who wish to practice violence and inflict maximum loss of life in the interests of a perversion of their religion." By contrast, a former jihadist from Manchester wrote that the "real engine of our violence" is "Islamic theology." Months ago, this young man informed me that as a militant he raised most of his war chest not from obscenely rich Saudis, but from middle-class Muslim dentists living in the United Kingdom. There's sobering lesson here for the new prime minister.

So far, those arrested in connection to the car bombs are, by and large, medical professionals. The seeming paradox of the privileged seeking to avenge grievance has many champions of compassion scratching their heads. Aren't Muslim martyrs supposed to be poor, disenfranchised, and resentful about both?

We should have been stripped of that breezy simplification by now. The September 11 hijackers came from means. Mohamed Atta, their ringleader, earned an engineering degree. He then moved to the West, pursuing his post-graduate studies in Germany. No servile goat-herder, that one. In 2003, I interviewed Mohammad Al Hindi, the political leader of Islamic Jihad in Gaza. A physician himself, Dr. Al Hindi explained the difference between suicide and martyrdom. "Suicide is done out of despair," the good doctor diagnosed. "But most of our martyrs today were very successful in their earthly lives."

In short, it's not what the material world fails to deliver that drives suicide bombers. It's something else. And, time and again, the very people committing these acts have articulated what that something else is: their religion.

Consider Mohammad Sidique Khan, the teaching assistant who masterminded the July 7, 2005 transit bombings in London. In a taped testimony, Khan railed against British foreign policy. But before bringing up Western imperialism, he emphasized that "Islam is our religion" and "the Prophet is our role model." Khan gave priority to God, not to Iraq.

Now take Mohammed Bouyeri, the Dutch-born Moroccan Muslim who murdered Amsterdam film director Theo van Gogh. Bouyeri pumped several bullets into van Gogh's body. Knowing that multiple shots would finish off his victim, why didn't Bouyeri stop there? Why did he pull out a blade to decapitate van Gogh?

Again, we must confront religious symbolism. The blade is an implement associated with seventh-century tribal conflict. Wielding it as a sword becomes a tribute to the founding moment of Islam. Even the note stabbed into van Gogh's corpse, although written in Dutch, had the unmistakable rhythms of Arabic poetry. Let's credit Bouyeri with honesty: At his trial he proudly acknowledged acting from "religious conviction."

For people with big hearts and good will, this has to be uncomfortable to hear. But they can take solace that the law-and-order types have a hard time with it, too. After rounding up the Toronto suspects, police held a press conference and didn't once mention Islam or Muslims. At their second press conference, police boasted about avoiding those words. If the guardians of public safety intended their silence to be a form of sensitivity, they instead accomplished a form of artistry, airbrushing the role that religion plays in the violence carried out under its banner.

Moderate Muslims denounce violence in the name of Islam but deny that Islam has anything to do with it. By their denial, moderates abandon the ground of theological interpretation to those with malignant intentions — effectively telling would-be terrorists that they can get away with abuses of power because mainstream Muslims won't challenge the fanatics with bold, competing interpretations. To do so would be admit that religion is a factor. Moderate Muslims can't go there.

Reform-minded Muslims say it's time to admit that Islam's scripture and history are being exploited. They argue for re-interpretation precisely to put the would-be terrorists on notice that their monopoly is over. Re-interpreting doesn't mean re-writing. It means re-thinking words and practices that already exist — removing them from a seventh-century tribal time warp and introducing them to a twenty first-century pluralistic context.

Un-Islamic? God no. The Koran contains three times as many verses calling on Muslims to think, analyze, and reflect than passages that dictate what's absolutely right or wrong. In that sense, reform-minded Muslims are as authentic as moderates, and quite possibly more constructive.
By Irshad Manji
If you like this article, go to www.tnr.com, which breaks down today's top stories and offers nearly 100 years of news, opinion and analysis