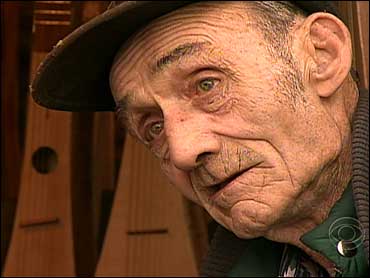 Every time 70-year-old Andy Mackie draws a breath, it's music to his ears - whether there's a harmonica there or not. As CBS News correspondent Steve Hartman reports, Mackie's just glad to be alive.

Mackie jokes, "I guess they don't need a harmonica player in heaven yet."

Mackie, a Scottish-born retired horse trainer, lives in a camper in northwest Washington state - he lives there, even though technically -- medically -- he should have died long ago.

After his ninth heart surgery, Mackie's doctors had him on 15 different medicines. But the side effects made life miserable. So one day he quit taking all 15 and decided to spend his final days doing something he always wanted to do.

He used the money he would have spent on the prescriptions to give away 300 harmonicas, with lessons included. "I really thought it was the last thing I could ever do," he says.

And when he didn't die the next month, he bought a few hundred more.

Harmonicas in hand, he explains, "I just started going from school to school."

"I'll see a pregnant lady on the sidewalk and I'll give her a harmonica for the baby," he says as an example.

Today there's nary a kid in the county who hasn't gotten a free harmonica from Mackie, or played one of his strum sticks.

To keep the kids interested in music as they get older, Mackie now spends the bulk of his Social Security check making them beginner string instruments. He also buys store-made instruments for kids that show a special interest. He provides free lessons to everyone by getting the older kids to teach the younger kids.

The end result is something truly unique to his corner of Washington. It seems everywhere you look, everyplace you go, every kid you meet has the same genuine passion for fiddle music.

"I can't explain the joy, Mackie says. "I don't think Bill Gates feels any richer inside than I do. He believes he's still living today because of the kids and the music.

And he doesn't expect any harmonica openings in heaven any time soon.

"I don't think the lord wants me yet, I still got something to do here -- lots more kids out there."