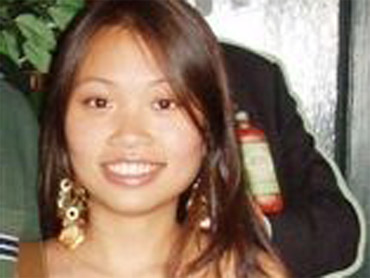 As the search intensified for a Yale graduate student who disappeared days before her scheduled wedding, a faculty member of the school where she did her undergraduate work says it would be very unlike Annie Le to skip out on her husband-to-be.

Le was last seen Tuesday entering a medical building, shortly after she left her office three blocks away without her belongings, including her cell phone and purse.

She was slated to marry longtime sweetheart Jonathan Widawsky on Sunday, but the wedding has been called off, reports CBS News Correspondent Kelly Wallace. Yale has offered a $10,000 reward for information on Le's whereabouts. Authorities say Widawsky, a grad student at Columbia University, is helping in the search for his fiance.

Speculation about Le's fate abounds, Wallace says, with many wondering whether she's a victim of foul play or a "runaway bride" such as Jennifer Wilbanks, who temporarily vanished before she was supposed to walk down the aisle in 2005

On "The Early Show Saturday Edition," Steven Manly, Director of Undergraduate Research and an Associate Professor of Physics at the University of Rochester in New York, where Le and Widawsky were undergrads, said Le "is a dynamo and very responsible and ... I'd be very surprised if she were a 'runaway bride,' as the press is calling her."

Manly told co-anchor Chris Wragge, "They're a beautiful young couple and they seemed to get along very, very well. Both of them have great personalities and (are) great students. And so, my heart goes out to the family and to Jon, and I hope that nothing bad has happened. ... I hope that there is a happy ending to this. I mean, I'm very concerned."

Widawsky is "a wonderful guy," Manly observed. "Great personality, very good student. Good teacher. And he's in graduate school at Columbia, which is a fine school. And of course, they take into account all his characteristics and grades and everything before admitting him, so he's one of our stars, as is Annie."

"Jon was a physics major in the department and Annie was his girlfriend," Manly recalled, "and she was in one of my classes. ... They were a bit of a fixture around the department, during the time they were here, which was a couple of years ago, and I often saw them together, and they always seemed very happy, and conversations with the two of them, or either individually, would almost always leave a smile on your face."

Manly says he wasn't at all surprised to hear Le had left her belongings behind. "She's working in a laboratory," Manly explained. "She's walking to another building to do a little work over there. When you're in the setting at a university behind closed doors, locked doors, that's a very common thing to do."