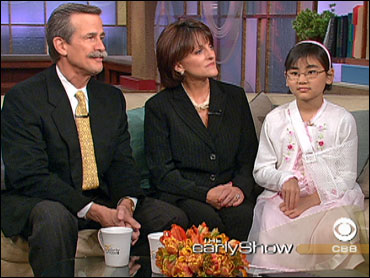 Nine years ago, Linda and Owen Wells, already parents of three, decided to adopt a baby from China. They named her Kailee.

But when Kailee was five, a high fever and heavy nosebleed were the first signs of a problem. Kailee was suffering from severe aplastic anemia, a deadly disease preventing her bone marrow from producing the blood cells and platelets she needed to fight infection. When doctors diagnosed the disease, they said Kailee had just a 15 percent chance of surviving.

The Wells moved from Albuquerque, N.M., to Milwaukee, Wis., so Kailee could be treated by one of the country's top specialists, Dr. David Margolis.

Marrow from a blood relative was Kailee's best chance, but Linda and Owen knew nothing of Kailee's biological family; Linda traveled to China twice in search of a donor.

"We knew nothing about her background. We knew no one there. When I first went to Beijing, I had the address of the Red Cross and ... and a phone number and a name," Linda explains. "And that was it."

Then, last October, a 28-year-old Chinese doctor proved to be a near-perfect match. The Children's Hospital of Wisconsin coordinated with the Chinese government to fly the donated cells to Milwaukee for transplant.

But even then, her odds of survival were just 50 percent to 70 percent. Six months later, Kailee reached a milestone, when she was well enough to return to school.

"The aplastic anemia, in my mind, is resolved. Gone. Not there," says Dr. Margolis.

Kailee still takes medication and must be watched closely. But thanks to the tireless efforts of her parents, the dedicated care of doctors on two continents, and her own determined spirit, Kailee has become what she could once only hope to be — a regular girl.

Appearing on The Early Show in New York on Thursday with her parents, Kailee told co-anchor Hannah Storm that going back to school was great and that meeting all her friends was the best part.

Her mom Linda acknowledges there have been some trying times during the recovery.

"As with any transplant, I think it's great that her aplastic anemia is gone. That's perfect. And everything we deal with now, the ups and downs, are just transplant, things that happen."

As for the donor, Kailee's father Owen says they have been in contact with him and that he invited them to visit China. "We receive an occasional e-mail from him. He's such a sweet, caring person. We cannot wait until next year when we can go back and thank him personally," he says.

The Wells' efforts have made a difference on two continents in terms of getting people involved with bone marrow donation, with an international event taking place on Mother's Day.

"This is the fourth annual 'Thanks Mom' donor drive," Owen says. "Currently, it's going to take place in 140 locations and 109 cities and 37 states, in British Columbia and Puerto Rico. It's going to be on May 13. And the goal is all mothers want their children to live healthy lives."