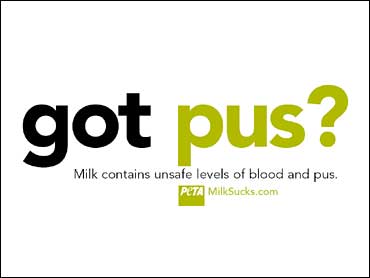 Got a problem with milk? Better not rip off the industry's well-known marketing slogan to express it.

Milk processors are demanding that People for the Ethical Treatment of Animals end a publicity campaign that asks "Got pus? Milk does."

PETA, which advocates a dairy-free diet, has plastered the slogan on T-shirts, mugs and other merchandise to draw attention to what it says are dangerous levels of somatic cells - pus - in much of the milk sold in this country. The pus gets there because of an udder infection called mastitis that can inflict cows raised for their milk, PETA says.

The California Milk Processor Board, which owns the Got Milk? trademark, has laughed off countless previous knockoffs, from Got Fleas? to Got Freud? The board even has welcomed some as boosting publicity for milk.

But the board contends there is no truth to the pus claims and that PETA is violating the campaign's trademark.

"Milk is one of the most regulated, tested and therefore safest products that consumers can buy," said Steve James, the milk board's executive director. "Pasteurization has been required for almost a century in order to remove harmful organisms and bacteria so it's safe for human biology."

In a letter provided by PETA to The Associated Press, lawyers for the milk processor board demand that PETA immediately cease the Got Pus? campaign and, by this Saturday, turn over any remaining merchandise along with profits. If PETA fails to comply, the milk board will sue, the letter says.

PETA's lawyers planned to reply in a letter Thursday that would dismiss the trademark infringement allegation as "entirely without merit."

"Your client cannot seriously contend that an appreciable number of consumers who see a T-shirt bearing the 'Got Pus? Milk Does' slogan would be confused into thinking that your client is the source of the T-shirt, attempting to sell milk by letting the public know that when they drink milk they are also consuming pus," the PETA letter says.

The dispute comes several years after PETA sued a different milk group, the California Milk Producers Advisory Board, over its ad campaign depicting allegedly happy cows grazing in California pastures. The ad campaign argued that happy cows produced great cheese, but PETA argued the ads were false and misleading. A state judge threw out the case in 2003 and the California Supreme Court declined to take it up.

Amazon workers in 30 other countries protest on Black Friday
Thanks for reading CBS NEWS.
Create your free account or log in
for more features.
View CBS News In
CBS News App Open
Chrome Safari Continue
Be the first to know
Get browser notifications for breaking news, live events, and exclusive reporting.