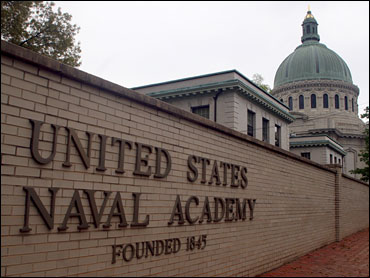 Ronan is accused of using a video camera hidden in an air purifier in his home to videotape Academy midshipmen he hosted at his house last year.

The Navy began its investigation in January after two men - one a midshipman and the other a former student at the academy - allegedly found the videos in Ronan's home and turned them over to authorities.

Navy prosecutor Lt. Justin Henderson says Ronan recorded midshipmen either with partners or alone in his spare bedrooms, edited the tape down to focus on the sexually explicit content and then transferred them to DVDs. Hundreds of gay pornographic images were also allegedly found on Ronan's home computer.

"Dr. Ronan violated the trust of his midshipman sponsorees," Henderson told the jury of six Navy officers hearing the case at the Washington Navy Yard.

Navy investigators found a purifier with a camera inside in the attic of Ronan's Annapolis home. The system is commonly known as a "nanny cam," often used to secretly monitor nannies.

Ronan was designated as a midshipman sponsor by the academy, hosting roughly a dozen students under the program where midshipmen spend weekends off campus at private homes to relax.

Ronan's attorney, William Ferris, says Ronan did not make the videotapes and that he bought the air purifier with the camera only to check on whether his midshipman sponsorees were having parties while he was away.

The tapes could have been the result of an attempt by one of the two to extract money from Ronan, Ferris said. The man was expelled from the academy in January, and faced the prospect of having to repay thousands of dollars to the government for his education. He had already asked Ronan for money and had been refused.

"This was a plan to extort money from Mr. Ronan that went awry," Ferris said.

The lawyer also suggested that midshipmen, who had access to Ronan's home computer, may have been responsible for the pornography found on his hard drive.

The military judge hearing the case ruled earlier this month that prosecutors can use the pornography in their case, described by Henderson as images of "athletic young men" and stills from pornographic videos. Prosecutors say the images demonstrate a motive for Ronan to tape the midshipmen. Ferris said the photos were not relevant to the case.

The case is expected to last two weeks.
By Stephen Manning