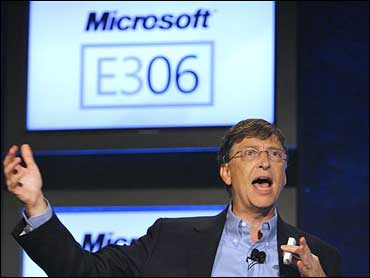 The "Live Anywhere" service will be available as part of Windows Vista, Microsoft's next-generation PC operating system. The consumer version is scheduled for release early next year.

"It means that you have one online community," Gates said Tuesday at a news conference. "This platform can really unleash developers to do amazing new things."

The system would extend the company's existing Xbox Live service for the Xbox 360 console into millions of Internet-enabled PCs and cellular phones. No pricing information on the new service was announced.

In recent months, Microsoft has been pushing a number of online services that it hopes will boost revenue as markets for its traditional software become increasingly saturated. The company expects to make money off such efforts through a mixture of subscription fees and advertising.

"The vision here is each platform plays its own role. We really think we're in a unique position," Gates said. "Microsoft is probably the only company that can pull this off."

In a demonstration, an Xbox 360 gamer using Live Anywhere was able to send an invitation to a friend on a PC. After the PC user agreed, the two connected for a cross-platform online gun battle.

In another example, a race car's stats were modified on a cellular phone, its appearance was edited in a paint program on the PC and then it was raced on a track on the Xbox 360.

Microsoft said it has sold about 3.2 million Xbox 360s so far — about half of them are used online. By the time rivals Nintendo Co. and Sony Corp. release their systems by the end of the year, Gates said Microsoft should have a 10 million unit head start and a selection of 160 Xbox 360 games.

Microsoft Vice President Peter Moore said the early launch of Xbox 360 gives the company a huge advantage going forward, saying the company was already on the "second generation of the next generation."

Live Anywhere highlighted a slew of announcements from the Redmond, Wash.-based company.

The company also said it would sell an HD-DVD player for high-definition movies in time for the holidays, but it did not release a price. Also announced was an Xbox Live Vision video camera, a wireless headset and a wireless racing wheel available this fall.

Finally, Microsoft appeased anxious gamers who cheered following a demonstration of the sci-fi shooter "Halo 3," due sometime in 2007.

Earlier in the day, Nintendo executives emphasized unusual games over glitzy graphics and said the video game industry must find new ways to broaden its appeal if the industry wants to keep growing.

The company did not release pricing details on its Wii console and instead showed off the system's unique controller, which can be swung around to control golf swings and sword strikes on the screen.

Company officials also confirmed the Wii would launch sometime in the fourth quarter of 2006.

On Monday, Sony said two versions of its PlayStation 3 will launch in North America on Nov. 17 as part of a worldwide simultaneous launch — a $499 version with a 20-gigabyte hard drive and another with a 60-gigabyte drive for $100 more. Availability had been pushed back from a spring release.

Sony also showed off the PS3's new controller, which can sense motion like the Wii system.

Sony, Microsoft and Nintendo are vying for control of the video game industry, which according to market research firm NPD Group, saw sales drop 5 percent to $7 billion in the United States last year. Much of it is blamed on consumers' desire to hold out for the PS3 and Wii.

The company presentations are a preview of sorts for the Electronic Entertainment Expo in Los Angeles, the video game industry's largest annual conference.