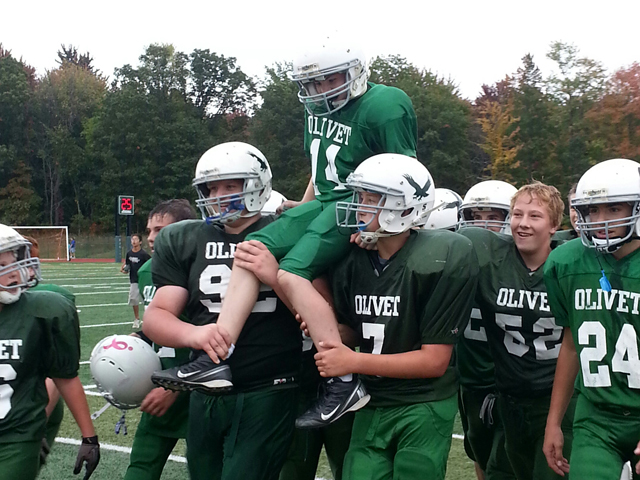 "Everyone was in on it," says Nick Jungel.

"But the coaches didn't know anything about it," Parker Smith says. "We were, like, going behind their back."

We've never heard of a team coming up with a plan to not score.

The play -- which was two plays, actually -- happened at a home game earlier this month. The first part of their plan was to try to get as close to the goal line as possible without scoring, even if it meant taking a dive on the one-yard-line, which it did.

The crowd was not happy.

"But us kids knew, hey, we got this, this is our time, this is Keith's time," Parker, the quarterback, says.

Keith Orr is the little kid in the brown jacket. He's learning disabled, struggles with boundaries -- but in the sweetest possible way. Because of his special nature, it's no surprise that Keith embraces his fellow football players. What is surprising is how they have embraced him.

"We thought it would be cool to do something for him," Parker says.

"Because we really wanted to prove that he was part of our team and he meant a lot to us," adds Nick.

"Nothing can really explain getting a touchdown when you've never had one before," says Justice.

Which brings us to part two of their play. If you didn't see Keith, it's because they were so protective of him, but he was in the middle of the rush.

When they crossed the goal line, Keith says it was "awesome."

"It was like, 'Did he just score a touchdown?'" Keith's mom, Carrie, says.

"Get your camera out!" his dad, Jim, remembers saying.

Keith's parents almost missed the moment, but they got the significance.

"Somebody is always going to have his back -- from now until the day he graduates," Carrie says.

She's right. When the football team decides you're cool, pretty much everyone follows suit. Today, Keith is a new kid, although by no means was he the only one who was profoundly changed.

"Once I saw him go in, I was smiling to here," says Justice, a wide receiver, pointing to his cheeks. "Nothing could wipe that smile off my face."

Asked why it affected him so much, Justice turns emotional.

"Because he's never been cool or popular, and he went from being, like, pretty much a nobody to making everyone's day," he says.

Justice admits the play wasn't his idea, saying, "I would have not really thought of that."

He says it never crossed his mind to give Keith any glory.

"I kind of went from being somebody who mostly cared about myself and my friends to caring about everyone and trying to make everyone's day and everyone's life," he says.

Which may just make that touchdown the most successful football play of all time.