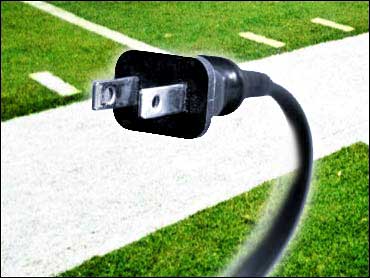 Edgerrin James scored from one yard out with 50 seconds left, giving Miami a wild 49-45 upset over UCLA and ending the Bruins' 20-game winning streak - longest in the nation.

"They're upset right now," UCLA coach Bob Toledo said, looking over a gloomy locker room scene moments after the game. "They know they let something slip away. The Fiesta Bowl is gone."

The game preceded the second big upset of the day, as No. 10 Texas A&M stunned No. 2 Kansas State 36-33 in double overtime to win the Big 12 title.

Entering the final day of the regular-season, Tennessee was first in the BCS standings, UCLA second and Kansas State third.

Florida State (11-1) was fourth, and with the losses by the Bruins and Wildcats, the Seminoles appear set to move into the Fiesta Bowl on Jan. 4 when the final BCS standings are released on Monday.

If the Volunteers beat Mississippi State on Saturday night, it appears the BCS's designated title game will be Tennessee vs. Florida State.

The Bruins, who staged several last-minute comebacks this season to keep their perfect season going, ran out of miracles in the Orange Bowl.

After James, who had a record-setting day with 39 carries for 299 yards and three touchdowns, gave the Hurricanes (8-3) the lead, Cade McNown had one last chance to pull out the win.

The left-hander came close, moving UCLA to the Miami 29 with four seconds left. McNown, who threw for five touchdowns and a school-record 513 yards, lofted a pass into the end zone, but it fell incomplete in a group of receivers and defenders.

And just like that, the Bruins' national title hopes were just about crushed.

"We dictated the momentum on offense. We rolled on them," McNown said after completing 26-of-35 passes as the Bruins totaled 670 yards but ave up 689. "What today showed was our immaturity on defense."

"The disappointing thing is not getting a shot at the Fiesta Bowl."

The likely scenario has the Bruins going to the Rose Bowl as Pac-10 champions to play No. 8 Wisconsin.

The UCLA loss likely means No. 6 Arizona will go to the Holiday Bowl instead of making its first trip to Pasadena.

"We just couldn't get them stopped," Toledo said. "Our defense didn't play well and if you don't play good defense, you don't deserve the national championship."

After the Bruins were knocked off for the first time since a 30-24 loss to Tennessee on Sept. 6, 1997, thousands of fans from the crowd 46,819 streamed out of the stands to celebrate with the players.

Meanwhile, in the corner of the end zone, Bruins wide receiver Brian Poli-Dixon, who caught two of McNown's TD passes, took off his helmet and slammed it to the ground. And then he cried.

"We spent a lot of time preparing for this game, but we didn't come in today prepared enough and they took advantage," Poli-Dixon, who caught four passes for 130 yards, said.

It was the Bruins' defense that did them in Saturday in the makeup of a scheduled Sept. 26 game postponed because of hurricane threats.

UCLA came into the Orange Bowl averaging 40 points, but the defense allowed 25 points and 407 yards per game (91st in the nation). The Hurricanes were so successful they topped their previous record offensive output -- 655 yards in the memorable 47-45 loss to Boston College in the 1984 `Hail Flutie' game.

Simply put, the Bruins were unable to tackle James or stop quarterback Scott Covington, who hit on 19 of 28 passes for 318 yards and three TDs.

McNown, who threw two TD passes in the first half, added scoring strikes of 14 yards to Danny Farmer, 61 yards to Poli-Dixon and 59 yards to Brad Melsby in the third quarter.

The Hurricanes cut the lead to 38-28 with 10 seconds lft in the third quarter on Najeh Davenport's 23-yard run and pulled within three points with 12:34 left on Covington's 71-yard TD pass to Santana Moss.

But the Bruins went ahead 45-35 with 6:54 left on McNown's 1-yard run, but then Miami took control. Covington threw a 29-yard scoring pass to Mondriel Fulcher with 6:08 and then the Hurricanes' Delvin Brown recovered a questionable fumble by Melsby after a 30-yard gain and Miami was back in business. A replay appeared to show that Melsby's knee was on the ground before the ball came loose.

Covington completed passes for 9 and 19 yards to Andre King and then hit Nick Williams for 14 yards to the UCLA 1. On the next play, James capped his brilliant day with a 1-yard run.

After so many nail-biting victories this season, the Bruins learned a harsh lesson -- there's no D in the University of California, Los Angeles.