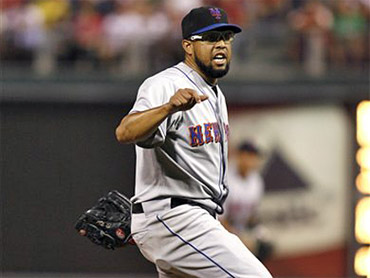 New York Mets reliever Francisco Rodriguez is in custody after what police called a "physical assault" on his father-in-law at Citi Field.

Police said Rodriguez will be charged with third-degree assault. Police said the pitcher hasn't been arrested.

Authorities said the incident occurred after the Mets' 6-2 loss to the Colorado Rockies on Wednesday night. Police say Rodriguez's father-in-law is in the hospital with a scrape on his face and a bump on his head.

"There was an incident at the ballpark between Francisco Rodriguez and his family. He was questioned by police and all other questions pertaining to this matter can be addressed to police," Mets spokesman Jay Horwitz said.

Several security guards, along some women and children, were seen around the Mets' family lounge near the clubhouse after New York's 6-2 loss to Colorado. Rodriguez's father-in-law had swelling above his right eyebrow.

Rodriguez has had previous confrontations with a team official, a coach and an opponent in his 1½ seasons with the Mets, though none of them reached this level.

Rodriguez did not pitch in the Mets' latest loss, which dropped them below .500. Reliever Manny Acosta gave up a two-out grand slam to Melvin Mora in the eighth inning.

In May, Rodriguez and bullpen coach Randy Niemann got into a heated exchange while the pitcher was preparing to enter a game. Mets manager Jerry Manuel later said the matter was resolved, without divulging what caused the dispute.

In July 2009, Rodriguez and former Mets official Tony Bernazard argued aboard the team bus. Bernazard was later fired by the Mets amid several allegations.

That June, Rodriguez and New York Yankees reliever Brian Bruney needed to be separated before a game. They had jawed at each other in the media a day earlier.