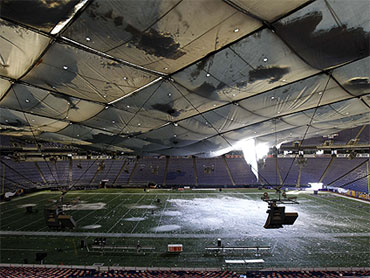 The Metrodome's torn roof won't be repaired in time for the Vikings' Monday night game with Chicago, stadium officials said Tuesday as the team prepared to use Minnesota's TCF Bank Stadium as a backup.

Engineers and workers who inspected the Metrodome's collapsed roof on Tuesday found damage from the weekend's blizzard was worse than initially thought, according to the Metropolitan Sports Facilities Commission.

Officials said they hoped in the next few days to have a better idea about just how long repairs will take.

"Our first priority is the safety and well-being of the Vikings fans and players, the hundreds of youth sports, community and other groups that use the Metrodome throughout the year and our employees," commission president Roy Terwilliger said in announcing that Mall of America field won't be ready for Monday night.

Workers at the university, meanwhile, began the daunting task of removing snow from the outdoor TCF Bank Stadium, which was buried after the weekend snowstorm dumped more than 17 inches in Minneapolis and caused the Metrodome's Teflon roof to collapse early Sunday.

"We're going to do the best we can to get as prepared as we can for Monday night's game," said Scott Ellison, assistant athletic director for facilities at the University of Minnesota.

The Vikings said in a statement that the team is working with the university and NFL to get the school's stadium ready.

"The Vikings are committed to ensuring a home game in Minnesota for our fans," the team said.