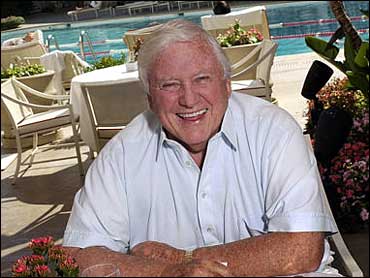 When Merv Griffin awakens in the morning at his spacious quarters in the Beverly Hilton Hotel, he contemplates which of his many enterprises he should devote his time to that day.

He could start with the landmark hotel itself, which he happens to own, or resort properties in Scottsdale, Ariz., and Galway, Ireland, where he converted John Huston's St. Clarens mansion into a luxury inn. Then there's a new 140-acre development at La Quinta, south of Palm Springs.

He could also tackle his television production company, which is reviving his "Dance Fever" series, or his movie company, which will soon release its first feature - "Shade," starring Sylvester Stallone - or Merv Griffin Productions, which stages movie premieres and other live events, including the Golden Globes and Grammys.

That's how he compartmentalizes his business interests, which are estimated to be worth more than $1 billion.

Griffin also found time recently to record an album and is preparing another. And if that's not enough for this band singer-turned-tycoon, he has written his second autobiography, "Merv: Making the Good Life Last." His first memoir, "Merv," was published in 1980, and he figured much had happened to him since then.

The new book gives hints of his early entrepreneurial style. His family was hit by the Depression; their home in San Mateo, Calif., was foreclosed by the bank. Young Merv sold magazines door to door, mowed lawns, published a two-penny newspaper, set pins in a bowling alley and sold Christmas wreaths.

Compare that to his dealings with Donald Trump. In the late 1980s, Griffin and Trump staged a highly visible tiff, involving billions of dollars, over control of Atlantic City casino-hotels. "We did all our chiding of each other in the newspapers," Griffin recalls. "`War at the Shore,' they called it."

What does Griffin think of Trump now?

"I think he's brilliant," he says during a luncheon interview overlooking the Beverly Hilton's azure pool. "I just would never - never deal with him again. I think he cannot lose that persona of his that says, 'I am the king of East Coast real estate developing.'

"His first words when he heard I was bidding against him were: 'You mean that band singer?' Now I had left Freddy Martin's band in 1952, and this was in 1988!"

He added with a twinkle in his eyes: "The press came to me and asked, 'Are you going to answer him back?' I said, 'No, just tell him to behave himself or I'll go around Atlantic City and take the T off his name.' That infuriated him."

Griffin said he got what he wanted, but has since divested himself of his gaming investments, including Paradise Island in the Bahamas.

For 23 years Griffin conducted a TV talk show, and his new book contains a wealth of anecdotes about his famous guests, including a recalcitrant Al Pacino. On the air, Griffin asked a "softball" question: "How did you make it from the Bronx to Broadway?" The sullen actor replied, "By subway."

Orson Welles was a special favorite, returning for 50 shows. Ailing on the last one, he went home and died two hours later.

Griffin devotes a chapter to his longtime friends, Ronald and Nancy Reagan. He often escorts the former first lady to dinner and social occasions. But he doesn't see the former president.

"Nobody does; he wouldn't know who I was anyway," Griffin says. "The toughest role in life is what she's doing. It's the caretaker who really suffers the worst; he's not suffering at all. To have been crazy about each other for so long - I just can't imagine what it's like. I see her as often as I can. And I try to talk to her every day."

Griffin seems in robust health, his round face a glowing pink. He appears to be losing the battle of the bulge, but that comes and goes according to his discipline - he had a quesadilla and yogurt ice cream for lunch.

Griffin's life is not all work. He starts off each morning by working four crossword puzzles - in ink. On weekends he escapes to his 80-acre ranch at La Quinta, where he has a track for his race horses. In the summer, he weekends at his ranch in Carmel Valley in
Northern California.

Although his enterprises certainly produce revenue, Griffin insists that his motivation is more creative than monetary.

"When I bought the Beverly Hilton and went into the hotel business, I wasn't at all interested in the financial aspect of it," he says. "I loved this hotel, and I saw what it could be. Out here by the pool I saw the outdoor carpeting all ripped; I brought in all the stone. I made the International Ballroom very acceptable for television (events), all the sight lines perfect.

"I had all these ideas. I can't stop the flow."