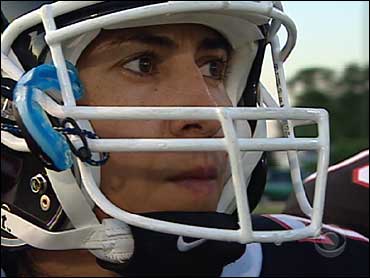 They're fast, furious and a force to be reckoned with.

"They're fundamentally much stronger than the guys are," said Jim Stahl, their coach.

"It's not powder puff. It's not flag. It's real, tackle football and people are surprised by the collisions and the hits," said player Linda Bache.

Forty-five players strong, they give as good as they get.

Undefeated team The Force is just one game shy of the Independent Women's Football League Superbowl.

Two major leagues have recruited more than 3,000 players for 80 teams in 67 cities.

And even a 46-year-old team owner.

"I'm the oldest player on the team," Bache said. "I never had an opportunity to play on any level."

At this level, no pain, no gain. Just ask quarterback Samantha Grisafe, who had a wad of wrapping on her hand.

"So you played injured - and then won the game?" Miller asked.

"Yeah, you do a lot for the team, and your team does a lot for you," Grisafe said.

Are the women paid to do all this?

"No, actually, we pay to play!" Grisafe said.

Aside from the bumps and bruises, these women sacrifice their time. Three hours a day, twice a week, they're on the practice field. And on game day, it's an all-day affair.

"Why torture yourself," asked Miller.

"It's not torture, it's definitely for the love of the game - the passion," said Brooks.

Blog: Find out how Michelle Miller did on the field with The Force.

That passion on the field keeps offensive linewoman Brooks grounded at home. Literally.

She's a push-over for her 10-year-old daughter Kayla who has autism. Football is her release.

"At the end of the day, I get to come out of here and let all the pain, the anger, the hurt, the frustration … just let it go away," Brooks said.

For this gridiron game, winning may not be the only focus in their lives. But this summer, it sure comes close.