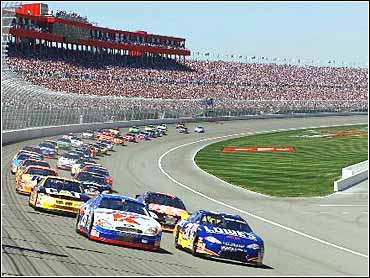 Jeremy Mayfield, overcoming a burning hot cockpit and a lost lap, made it 10 different winners in as many Winston Cup races Sunday with a victory in the NAPA Auto Parts 500.

Mayfield, racing under the cloud of a NASCAR investigation into alleged illegal fuel use in the previous race, came away with the second victory of his Winston Cup career and his first in 22 months and 62 races.

Apparently referring to the ongoing probe by NASCAR into the fuel used by the Kranefuss-Penske Racing team in the April 16 race in Talladega, Ala., the elated Mayfield said, "We ain't running nothing. We don't need nothing."

NASCAR officials refused to discuss the allegations or possible sanctions against Mayfield's team, but did say on Friday an investigation was under way and would not be concluded until sometime in the upcoming week.

Mayfield had a problem early in the race when the oil cooler in his Ford began leaking into the cockpit, making an already hot day even hotter. At one point late in the race, crew chief Peter Sopenzo had a crewmen hand the driver two bags of ice during a pit stop to slip behind his back.

"It was real hot and I'm probably all blistered up, but you've got to suck it up sometimes," Mayfield said.

Following the celebration in victory circle, Mayfield was taken to the infield medical center for examination and treatment for dehydration.

The winner, whose only previous victory came in Pocono on June 12, 1998, started 24th in the 43-car field and got off to a good start. But, with the oil tank problem, Mayfield was forced to make two quick pit stops and found himself 37th on the restart after the first of six caution flags in the race.

He quickly moved back into contention, slicing through traffic with what was obviously one of the fastest cars on the California Speedway's 2-mile oval.

Still, it didn't appear Mayfield would be a factor up front until Jimmy Spencer spun and hit the wall on lap 219 of the 250-lap event.

Kenseth, who dominated the race, leading four times for 119 laps, was in front of second-place Labonte by more than three seconds when Spencer brought out the caution.

All the leader pitted and several, including Mayfield, changed only two tires while Kenseth and Labonte both took the time to change all four.

Mayfield, who also took no gas, came out first and stayed there the rest of the way, although he very nearly lost it.

Labonte charged back to regain second place on lap 234, but trailed the leader by just over two seconds. The series points leader replacing Mark Martin, who finished 14th Sunday steadily cut into the lead and was trailing by only 1.016 seconds when Dick Trickle hit the wall on lap 243.

On the ensuing restart on lap 247, Mayfield's ignition failed and Labonte's Pontiac pulled alongside on the inside of the Ford. But Mayfield quickly switched to his backup ignition and set sail, pulling back into the lead.

"On that restart, (Mayfield) kind of scared me," Labonte said. "I was going to try to get by him on the outside and he let off the gas and I thought he might be trying to block me and I hesitated a little. It messed up my momentum and my plans."

Labonte, one of the 10 drivers who have set a record for the most different winners at the start of a season, added, "Matt Kenseth would have won and I might have finished second if that yellow hadn't come out. He had the best car all day."

Kenseth, who fell all the way to seventh after the final pit stops, wound up third.

"I just planned on losing all day," said Kenseth, who drove in only his 16th Winston Cup race. "I knew something would happen. Then, just when I thought we might have it won, that's when it happened.

Kenseth was followed by Ricky Rudd, Jeff Burton, Ward Burton and pole-winner Mike Skinner. Jeff Gordon, who won two of the first three California races and finished fourth in the other, was never in contention and wound up 11th Sunday.