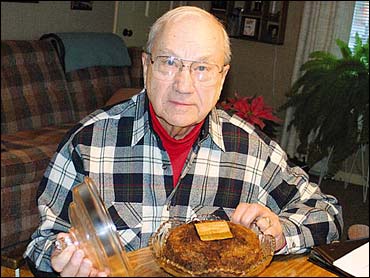 Jay Leno was warned he may need a doctor, but he went through with eating a 125-year-old fruitcake anyway.

"Is it crystallized?" asked Leno, before eating a small bite pried from the cake with a pocketknife.

"It needs more time," said the talk show host, a pronouncement delivered only after taking a definite and very deliberate chew.

The fruitcake is somebody else's family heirloom, the treasured but strange property of Morgan Ford, 83, of Tecumseh, Michigan, whose great grandmother, Fidelia Bates, baked the pastry generations ago.

The cake, Ford's personal claim to fame, Tuesday also became his ticket to minor celebrity as - fruitcake in hand - he appeared as a guest on "The Tonight Show" intent on sharing a slice with Leno.

Ford is the caretaker of the fruitcake, which has been handed down through generations.

Ford's daughter, Julie Ruttinger, of Tecumseh, e-mailed "The Tonight Show" recently about her family's antique fruitcake after seeing "The Fruitcake Lady" on the show. She wanted to tell them "we've got the real fruitcake."

It didn't take long to convince the show's producers that the cake might be worth a look, but transporting it to Burbank involved precautions that might have astounded Mrs. Bates.

The producers even wrote a letter to help explain the fruitcake's importance to airport security personnel, to guard against any potential problems in getting the unusual cargo on the plane to California.

The cake rests in a glass bowl, covered by a glass top. A large raisin and what might be a clove are visible among the brown mass - Ford says it's fossilized - that emits a pleasant odor of spices.

Its baker died in Berkey, Ohio, in 1879 and the cake remained untouched for 85 years. Someone clipped Bates' obituary out of The (Toledo) Blade and placed it on top of the cake. Inside the glass cover someone glued newspaper clippings that read "Mother 1878 November 28." Ford guesses that is when the cake was baked.

"I kind of think that after she died, people felt strongly about it and didn't want to eat her cake," Ford told The Daily Telegram of Adrian. "I have it because the people before me saved it, and it became a keepsake."

Not much is known about the origin of the cake; even the recipe is lost.

"I don't think my dad knew anything more about it than I do now," said Ford, who intends to pass along the fruitcake to his son, James Ford, of Tecumseh.

"I guess I don't have anything else that's a family heirloom," James Ford said. "It's history. I think my dad gets a little more fun out of it than I do."