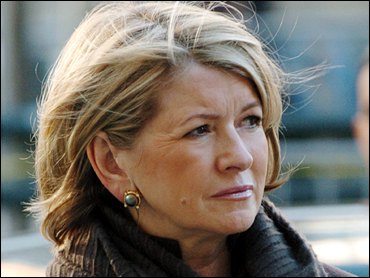 The media should have been given access to jury selection in Martha Stewart's securities fraud trial, a federal appeals panel ruled Wednesday.

"We do not see anything in the district court's findings, other than perhaps the degree of media coverage, that differentiates this case from any other high-profile prosecution," the appeals court wrote. "The mere fact that the suit has been the subject of intense media coverage is not, however, sufficient to justify closure."

The three-judge appeals panel said that "to hold otherwise would render the First Amendment right of access meaningless." It noted that openness of the court process "acts to protect, rather than to threaten, the right to a fair trial."

Seventeen media organizations, including The Associated Press, had argued that high public interest should not close jury selection.

The appeals court said it knew its ruling was too late to make a difference in the Stewart trial, which began last month. But it said the issues likely would arise in future trials and were too important to overlook.

Prosecutors and defense lawyers in the Stewart case did not immediately return calls seeking comment after the ruling.

Cedarbaum, the Stewart trial judge, had ruled that the case was unusual because spectacular pretrial publicity led many members of the public to form opinions about Stewart's guilt or innocence in the stock trading case.

During oral arguments earlier this year before the appeals court, the judges were skeptical when prosecutors said the Stewart jury selection process should be closed.

The judges noted that jury selection has been closed historically only in extraordinary circumstances, which the U.S. Supreme Court has described as when "closure is essential to preserve higher values and is narrowly tailored to serve that interest."

During one exchange, a prosecutor said it was necessary to keep the media out because they have paid so much attention to what Stewart wears to court that jurors would fear the media would analyze their clothing, too.

To that, appeals Judge Loretta A. Preska responded, "So what?"

In the Stewart trial itself, Cedarbaum has ruled that friends of the government's star witness will be allowed to tell jurors what he confided to them just after the domestic diva dumped ImClone Systems stock.

The prosecution also plans to call a friend of Stewart's to wrap up its case.

Most of the evidence and testimony so far has revolved around telephone calls and messages between Stewart and her broker and co-defendant Peter Bacanovic, reports CBS News Correspondent Cami McCormick.

The judge has severely limited what the prosecution can present, and barred the government from admitting into evidence a voice mail Bacanovic left for Stewart on Feb. 4, 2002. That was the same day she was first interviewed by investigators looking into her ImClone stock sale.

The friends are expected to testify that Douglas Faneuil told them in early 2002 — long before he began cooperating with the government — that he had done something wrong, and possibly that he had been pressured to do it.

At the same time, Faneuil was telling federal authorities that he simply gave Stewart a stock quote on Dec. 27, 2001, then followed her orders to sell all her 3,928 shares of ImClone.

He changed his story in the summer of 2002, claiming instead that Bacanovic ordered him to tip Stewart that day that ImClone founder Sam Waksal was selling his shares.

Faneuil told the same story earlier this month at Stewart and Bacanovic's trial. Testimony from his friends that he was worried long before he came forward would damage both Bacanovic and Stewart's cases.

"The government is entitled to show … that what he told his friends was consistent with what he decided to tell the government in the summer of 2002," Cedarbaum ruled Tuesday.

Testimony of Faneuil's friends could provide a boost to the government just as prosecutors are wrapping up their case. They told the judge they expect to rest by Thursday.

The decision not to allow the voice mail limits the government's ability to prove Stewart and Bacanovic conspired to lie about Stewart's sale of ImClone.

"The fact that he tried to contact her really isn't evidence of anything, other than that they talked to each other sometimes," Cedarbaum said.

The essence of the conspiracy charge is that Stewart and Bacanovic worked together to hatch a cover story for why Stewart sold her ImClone stock.

The judge also limited what prosecutors could argue about two other calls between Stewart and Bacanovic on Jan. 25, 2002, the day Stewart was informed that federal prosecutors wanted to speak with her.