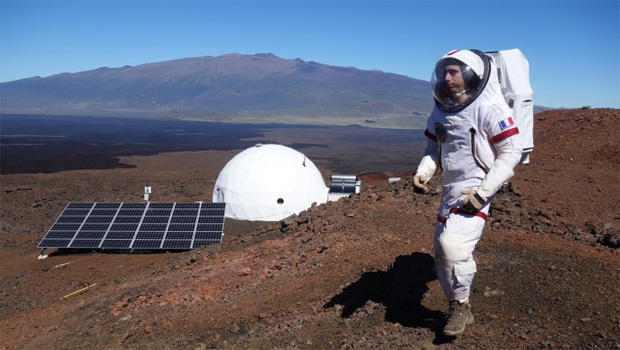 NASA hopes a yearlong experiment that just ended will help reveal what it would be like to send astronauts to Mars.

“Welcome back to Earth!”

Correspondent Errol Barnett reports they’ve actually been spending all their time in a solar-powered dome on the side of a volcano in Hawaii, part of the NASA-funded program HI-SEAS.

Last August, the group (including an architect, astrobiologist and aerospace engineer) came from across the globe to live in the nearly 1,500-square-foot dome.

Over the next 12 months, they had limited food and water and used a computer with at least a 20-minute delay to communicate with the outside world.

“I’m super-excited because it’s the first time we get to be outside without wearing a spacesuit, and everything is different,” said one participant.

It’s the fourth (and longest) time HI-SEAS has performed this type of mission.

From past HI-SEAS projects:

“A mission to Mars is going to be a complex system of systems,” said Kim Binsted, principal investigator of the project. “Some of those systems are going to be technological, and some of them are going to be human. And it’s just as bad if the human part of the system fails as if a rocket blows up.”

Based on this experiment, the crew is optimistic about travel to Mars. They say they would make the trip themselves if they could.

“I can give you my personal impression, which is that a mission to Mars, in the close future, is realistic,” said HI-SEAS crewmember Cyprien Verseux,

If you don’t want to wait for that day, the University of Hawaiʻi Manoa program is currently accepting applications for next year’s eight-month mission.

This crew’s advice for the next group? Bring a lot of books!