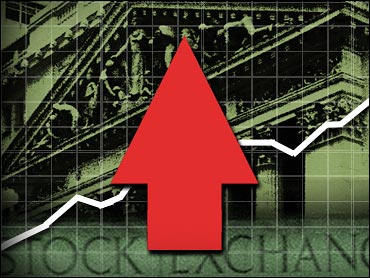 Wall Street shot higher Monday on better-than-expected manufacturing data, but gave up much of its gains after the Dow Jones industrials surpassed the 9,000 mark for the first time since December.

Analysts said investors were upbeat about an economic recovery, but some were cashing in profits because of concern the market's recent surge might have come too fast, too soon.

"The economic activity is slow to improve but the market is optimistic," said John Forelli, portfolio manager for Independence Investment LLC in Boston. "For the market, the glass is half-full - as opposed to three-quarters empty as it had been for a while."

The Institute for Supply Management reported Monday that its manufacturing index was 49.4 percent last month, up from 45.4 in April. A reading below 50 means manufacturing activity is slowing; still, the figure was better than the 48.5 that economists were expecting.

However, the Commerce Department said spending on construction projects dipped by 0.3 percent in April from March to a seasonally adjusted annual rate of $862.6 billion. It was the third straight month that spending fell and was weaker than the 0.2 increase analysts were expecting.