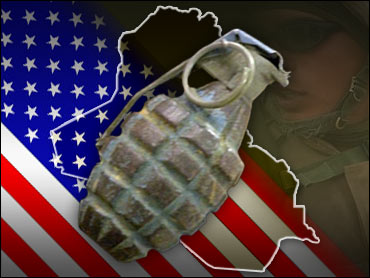 A federal indictment alleges a grenade attack that injured a Marine in Kuwait was carried out by a fellow Marine plotting with the man's wife and trying to disguise the crime as a terrorist act.

Wendy Glass, who allegedly had an affair with Framness, was arrested Thursday in Yuma, and is scheduled to be arraigned Tuesday in federal court in Phoenix.

Framness, an 18-year veteran, is being held at the Marine Corps station in Miramar, Calif., where his squadron is headquartered, said Gunnery Sgt. Matt Olivolo. Framness is to face military charges before appearing in federal court.

Framness detonated a grenade after luring James Glass, 37, into a guard shack, according to the indictment handed up Wednesday.

Glass, a 20-year Marine veteran, suffered shrapnel wounds to his neck, back and legs. He has recovered and is back in Yuma with his unit, Marine Wing Support Squadron 371.

The Glasses and the Framnesses were neighbors who socialized together before the Framnesses divorced, the indictment said. The document alleges Framness and Wendy Glass began an affair in 2001 and wanted to collect life insurance benefits from James Glass' death.

The indictment alleges that Framness and Wendy Glass plotted to make James Glass appear as if he had driven his car off a cliff while inebriated during a weekend cabin trip in California last year. The plan wasn't carried out because James Glass wasn't "sufficiently intoxicated," records say.

Framness and James Glass were deployed to Kuwait in early 2003 and stationed at Camp Snake Pit at the Ali Al Salem Air Base. E-mail messages and phone conversations between the defendants indicated another murder plot, the indictment said.

In a phone conversation around April, Wendy Glass allegedly told Framness that she didn't want to know details of the killing and also didn't want her husband to suffer.