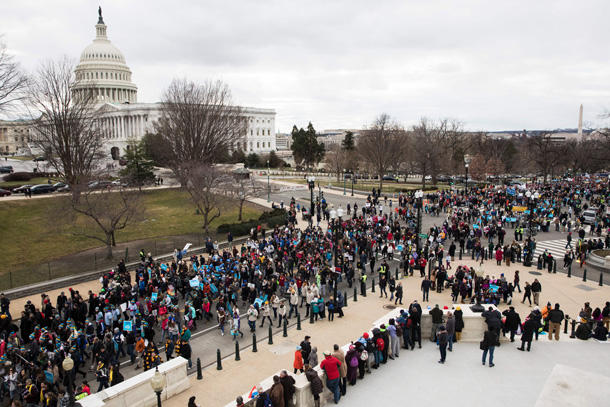 It was the first time that a vice president attended the march and addressed it in person. Attendees were ecstatic about the visit, which Pence said was encouraged directly by President Donald Trump.

Protestors came from far and near to march from the Washington Monument to the steps of the Supreme Court.

Emily Boudreaux, a 22-year-old college student who attends Louisiana State University of Alexandria, voted for Trump. She arrived at the rally about four hours early to get a front row view of Vice President Pence.

“To know our movement has support from the White House just makes you think that this can go further,” she said.

Taisya Gowlovech, an 18-year-old student at O’Gorman High School in Sioux Falls, South Dakota, said she drove in a vehicle with her best friend for 28 hours to be a part of March for Life. She, too, wanted to see the vice president speak on behalf on the president.

The crowd was noticeably youthful. Demonstrators from Catholic schools and Right to Life student organizations were visible everywhere, and marchers packed Constitution Avenue for more than an hour.

“This is because of Donald Trump,” said Kristin Hawkins, President of Students for Life, an anti-abortion organization that focuses on millennial outreach. “There’s lots of optimism that we’re going to see a lot of great things come out of the administration.”

However, that optimism is also paired with caution. Hawkins said that just because President Trump has promised to defund Planned Parenthood, reinstated the Mexico City Policy and promised to push restrictions on abortion providers, the movement will have to continue to hold the administration accountable.

Monica Stuckwisch, who works with the American Association of Pro Life OB/GYN’s, said she didn’t vote for Mr. Trump in part because he didn’t make abortion a common talking point on the campaign trail. Instead, she cast her ballot for Darrell Castle of the Constitution Party.

Although Stuckwisch recognizes President Trump’s flip-flop on abortion since the ‘90s, she said Pence reassured her at the rally that the administration was fighting for her side.

Greg Ingel of Detroit, Michigan, was another front-row supporter at the March for Life protest. He proudly sported a “Make America Great Again” hat and said he voted for the president because of the Supreme Court.

Ingel said he wasn’t one-hundred percent sure about Mr. Trump’s personal views on abortion, but Pence’s participation at the rally gave the March for Life “a new enthusiasm.”

Mr. Trump may have not been the perfect candidate for many in attendance. But most felt he could ensure a swing of power in the US Supreme Court that could lead to the repeal of the Roe v. Wade decision of 1973, which legalized abortion nationwide.

Kansas Governor Sam Brownback was one of many Republican politicians in attendance. He, like many, reiterated the importance of President Trump’s first Supreme Court nomination, which is due to be announced next Thursday.

“It’s time to repeal Roe v. Wade, because that gives this issue back to the states, and different states will take different routes,” Brownback said.

Ilya Shapiro, a Senior Fellow at the Cato Institute, said that a repeal of Roe v. Wade won’t happen any time soon. Mr. Trump, he said, would have to appoint at least two Supreme Court justices before any potential review of the case.

He may get his chance, however, if either Justice Anthony Kennedy or Justice Ruth Bader Ginsburg retire in the next four years.

Before Mr. Trump’s second Supreme Court nomination arrives, making a Roe v. Wade reversal feasible, Brownback said the anti-abortion movement will continue to pressure Washington because advocates are closer than they have ever been on scaling back abortion access, at least since the Reagan administration.

Former Pennsylvania Senator Rick Santorum, a former primary rival of Mr. Trump, said that the ball is now in the “pro-life” movement’s court, and that Novemeber’s election results are to thank for that.

“I think we have a Supreme Court pick coming up next week, and that will certainly intensify everything … And that’s when we say, ‘game on,’” Santorum said.