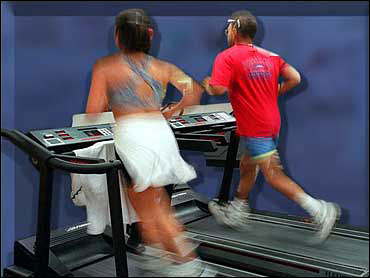 About a third of U.S. teens would flunk a treadmill fitness test, a new study shows, meaning that more than 7 million youngsters could face higher risks for heart disease later in life.

While that finding is not surprising — given previous research showing that about 16 percent of U.S. schoolchildren are seriously overweight — it's "very concerning," said Dr. David Ludwig, director of the obesity program at Children's Hospital Boston.

Ludwig, who was not involved in the study, called treadmill tests a good measure of fitness. He said the results show that "at a time in life when adolescents and young adults should be at peak levels of fitness, there's in fact a very high prevalence ... of very low fitness."

The analysis of nationally representative data from government health surveys by Northwestern University researchers found that 34 percent of girls and boys aged 12 to 19 showed a poor level of cardiovascular fitness on an 8-minute treadmill test.

The tests became faster and steeper after a 2-minute warmup, and a rapidly increasing heart rate after just a short period of exercising defined poor fitness.

About 14 percent of the adults showed a poor level of fitness, but that underestimates the true number who are unfit because adults with high blood pressure and other cardiovascular risk factors were excluded from the treadmill test, said lead author Mercedes Carnethon.

Teens and adults with poor fitness were two to four times more likely to be overweight or obese than those considered moderately or highly fit, the study found. Waist size, cholesterol levels and blood pressure also were higher in those in the low fitness category.

"We've known for a long time that there's a trend toward declining physical activity" among U.S. children, said Carnethon, an assistant professor of preventive medicine at Northwestern. The study shows this "is now being reflected by the prevalence of poor fitness."

Average cholesterol levels were about 10 points higher for youngsters in the low fitness category than for those considered highly fit. Blood pressure differences between categories was not as dramatic.

"While adolescents aren't at risk for heart disease in the short term," Carnethon said, "this has important implications for the long term health of youth in the United States."

The researchers did not calculate how many youngsters were in the moderately and highly fit categories and did not have data on what percentage of people in each of the three categories had high blood pressure and other cardiovascular risk factors, Carnethon said.

The average body-mass index for boys and girls was within the normal range, but for adults it was 27, or in the overweight range. A BMI of 25 to 29 is considered overweight; 30 and over is obese.

The study "really highlights that there's a problem," said Dr. David Bernhardt, a Madison, Wis., pediatrician and member of the American Academy of Pediatrics' Council on Sports Medicine and Fitness.
By Lindsey Tanner