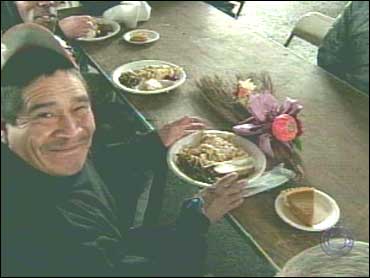 Thanksgiving is a day to give thanks for all we have and to remember those who have very little. And as CBS News Correspondent Mika Brzezinski reports, even as the nation's economy improves, the number of people in need, and going hungry, is growing.

For 57 years, Christine Prescott has worked at New York's St. Paul's Church, and this Thanksgiving is no different. With her bible in hand, she's signing in the hungry to share in the church feast.

She calls the church fare "food for the spirit."

And the food is far more precious this year for Prescott's church. A surge in need coupled with a drop in donations is forcing them to stretch every meal, and sometimes to turn people away.

"We run out of food," Prescott says. "Donations are down 75 percent."

Nation wide, experts point to a very merry economy the Christmas. It may be, according to most economic indicators, the rosiest pre-holiday outlook in the last few years.

Even so, for the third year in a row, the number of hungry Americans has been rising. The government now says 35 million Americans don't know where their next meal is going to come from, and that number includes 13 million children.

In fact, far more people seem to be suffering. In Kannappolis, N.C., where thousands were laid off from a local textile plant, a day-long food giveaway gave away nearly 1000 bags of groceries in just two hours.

And in Atlanda, 20,000 of the hungry and homeless were fed at Turner Field.

At Christine Prescott's church, chances are they may have to turn people away this year.

"I hope that we can feed everyone that comes in," says Prescott. "I hope no one is turned away, especially today, Thanksgiving Day."