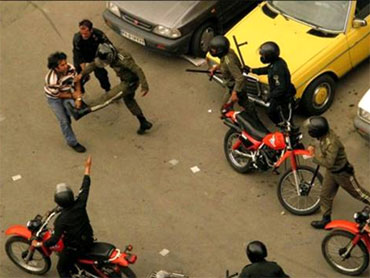 Two-thirds of Internet users who download music don't care whether they're violating copyright laws, according to a new survey that highlights the uphill enforcement battle facing the recording industry.

The survey published Thursday by the nonprofit Pew Internet and American Life Project estimated that roughly 35 million American adults use file-sharing software, about 29 percent of Internet users. Those figures were generally consistent with other estimates of 60 million American users across all age groups.

The Pew survey was completed before the Recording Industry Association of America announced its aggressive campaign to sue individual computer users who illegally share "substantial" collections of music, so it was unclear from the survey whether the campaign was discouraging online piracy.

Pew researchers said differences between men and women, blacks, whites and Hispanics and between income groups were not statistically significant when measuring copyright concerns.

The RIAA, the trade group for the major recording labels, said the Pew study was outdated, adding that it believes its enforcement efforts have affected attitudes toward downloading music.

"We believe that the most powerful deterrent is the message that uploading or downloading copyrighted works without permission is against the law," the RIAA said in a statement. "We have worked hard to educate the public about what the law says and potential consequences, and other studies have shown that that message is beginning to take hold and will serve as an effective deterrent."

The chairman of the Senate's permanent subcommittee on investigations began an inquiry Thursday into the industry's crackdown against music swappers, calling the campaign "excessive."

"Theft is theft, but in this country we don't cut off your arm or fingers for stealing," said Sen. Norm Coleman, R-Minn., who was a rock roadie during the 1960s.

In a letter to RIAA President Cary Sherman, Coleman criticized the group for issuing subpoenas to "unsuspecting grandparents whose grandchildren have used their personal computers" and others who may not know their computer is being used to download music.

He asked the RIAA to furnish him with a list of its subpoenas; its safeguards against invading privacy and making erroneous subpoenas; its standards for issuing subpoenas; and a description of how it collects evidence of illegal file sharing.

The RIAA said it would be "pleased" to provide Coleman the information he requested.

"It will confirm that our actions are entirely consistent with the law as enacted by the U.S. Congress and interpreted by the courts," the RIAA said in a statement.

When computer users download a copyrighted song, file-sharing software automatically makes it available for other Internet users to download, too. It is possible - and increasingly popular - to reconfigure the software to allow downloads but prevent sharing files, although this undermines the concept of public file-sharing networks.

The survey was based on interviews conducted during random telephone calls by Princeton Survey Research Associates during March, April and May among a sample of 2,515 adults in the continental United States. The margin for error was plus or minus 3 percent.