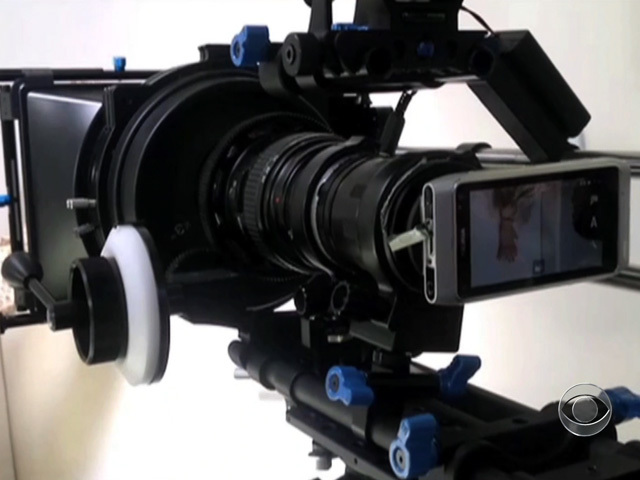 When he invented the telephone in 1876, Alexander Graham Bell could hardly have foreseen how the producers of a brand-new movie would use a modern-day descendant of his creation. CBS News correspondent Ben Tracy has the news on this latest technological innovation.

More lifeline than phone line, our tiny pocket computers seem to be able to do just about anything. These days, they even talk to us.

Now for the first time, a smartphone was used to shoot an entire feature-length film that will actually be released in a theater.

The movie is called "Olive," about a girl who transforms people's lives without saying a word. Hooman Khalili is the director.

"We want people to ultimately go in and say, 'Alright, we gotta check out this cell phone movie.' But as soon as the projector starts, and you see how vibrant the colors are, and you see how crisp everything looks, and how perfect the resolution is, you're gonna forget you're watching a cell phone film."

Every frame of the film was shot on a Nokia N8 smartphone. The crew even managed an aerial shot by strapping the phone to a remote control helicopter and hoping for the best. It took 17 takes to get it right.

"It was difficult," said Khalili, "but ultimately it was so much cheaper than getting a crane. Because that helicopter pilot cost 600 bucks."

One of the biggest challenges is that smartphones think they are smarter than us. The crew had to hack into their phone and permanently disable the auto focus and auto zoom to get the shots they wanted.

They then attached a 35-milimeter lens to the front of the phone in very low- tech and low-budget fashion: They used double sided tape.

Yet the film had all the Hollywood trappings: hair and makeup, location scouts, and even two-time Academy Award-nominated actress Gena Rowlands.

It cost half a million dollars to make. Chris Kelly, a former Facebook executive, put up some of money.

"If you can put the power in the palm of someone's hand to shoot a beautiful movie like this," said Kelly, "there's a lot that you can do about storytelling in the world. Somebody's got to do it first and that's what we wanted to do."

"Olive" is now playing at a movie theater near Los Angeles. It will run for a week so it can be considered for an Academy Award in February.