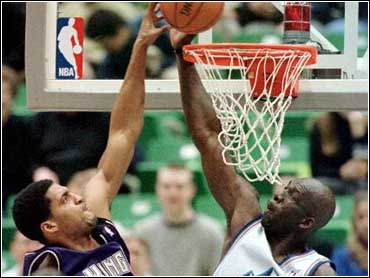 John Stockton and the aging Utah Jazz got the best of the young Sacramento Kings.

"We are old. We can't get around that fact," the 38-year-old Utah guard said Thursday night after the Jazz's 119-108 victory over the Sacramento Kings. "The numbers tell the truth, but I don't think we're playing old."

"Everybody came out to play tonight," Stockton said of his team's highest scoring game of the season. "We focused in on what we needed to do defensively and it's amazing what kind of lift offensively that gives us."

The star point guard pushed his NBA-record assists total to 13,500 on a crosscourt pass to Hornacek for Utah's first basket as the Jazz won for just the third time in their last 10 games.

"That's the first time I've seen us play like that in a long time and it's kind of refreshing," Malone said.

Chris Webber led Sacramento with 22 points, and Corliss Williamson had 18. Jason Williams had eight points on 2-for-10 shooting and added nine assists for the Kings, who have lost five or their last six road games.

Stockton hit two free throws to give Utah a 104-93 lead midway through the fourth quarter, but Sacramento cut the margin to six on on Barry's 3 pointer and Tony Delk's basket.

The Jazz regained control with their trademark precision. Stockton scored on a driving layup, Hornacek hit a jumper as the shot clock expired, and Malone added two free throws to make it 110-98 with 3:21 to play.

"You give them credit they took it to us," Sacramento coach Rick Adelman said. "They made the big shots to keep us away."

Utah shot 52.5 percent from the field as it topped its previous season high of 118 points against Charlotte on Jan. 5. The Jazz had 30 assists, 14 more than the Kings.

"It was pretty obvious to me that we did a better job of trying to set our people up, come off screens for shots," Utah coach Jerry Sloan said. "We're certainly a better team when we play like that than we are when we kind of just hang out."

Utah scored the first five points of the second half and took its biggest lead at 69-47 on a Hornacek free throw. But Williamson, who had 16 points in the third quarter, had seven points in a 16-4 spurt that made it 79-71 with 3:40 left in the period.

"Those guys are so good and so smart, you can't make mistakes like getting down by 20 points," Webber said.