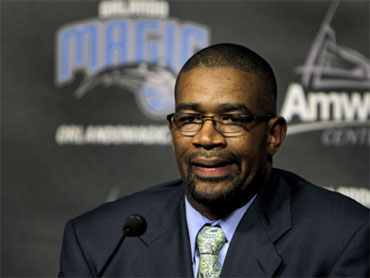 A rough patch early this season was enough to convince the Orlando Magic that perhaps they weren't good enough to contend in the Eastern Conference after all. They acquired troubled guard Gilbert Arenas from the Washington Wizards and Hedo Turkoglu and Jason Richardson from the Phoenix Suns in a major roster shakeup Saturday.

"We needed a little bit more punch," Magic president Otis Smith said. "All those guys coming in have an ability to move the ball. After looking at our team through 25 games, we were missing a little something. I thought change was needed."

The overhaul was a major move for a franchise that began the season believing it had all the pieces for its first championship.

Instead, Orlando had lost five of its last six games to drop from first to fourth in the Eastern Conference. The slide was magnified by winning streaks of 11 by Miami and 12 by Boston, a ripple effect that was enough to force Orlando to revamp the roster.

After losing to the Los Angeles Lakers in the NBA finals in the 2008-09 season, the Magic parted ways with Turkoglu — a fan favorite who went to Toronto — and traded with New Jersey to get Carter. The decision turned out to be a disaster; Carter struggled mightily in Orlando's disappointing exit in the East finals last season against Boston.

"I don't think it's admitting a mistake," he said. "I don't regret breaking up the finals team. I think it was the right decision at the time."

The Wizards and Suns were happy to part ways with pieces that didn't pan out.

Arenas was suspended 50 games last season for bringing a gun into Washington's locker room. He also faked an injury to sit out a preseason game this year, and his often critical remarks were a distraction for a young team now centered on No. 1 overall pick John Wall.

"We're totally in a rebuild," Wizards coach Flip Saunders said. "We've said that. We were in a situation where we had three of our top players play pretty much the same position in John (Wall) and Gilbert and Kirk (Hinrich)."

For the Suns, the deal was the first significant move pulled off by their new front office of president Lon Babby and general manager Lance Blanks. The deal addresses Phoenix's glaring weaknesses: a lack of size and poor defense.

"Carter and Pietrus give us a great defensive presence on the perimeter and they should be extremely dynamic offensively. And, of course, I think we all recognize that we had a need here for an increased interior presence, size and rebounding," Babby said. "And Gortat is really someone that we've had our eye on since we got here."

The Magic made strong pushes to acquire Denver's Carmelo Anthony or New Orleans' Chris Paul, but after little progress, they began seeking other options.

Smith has been a close friend and mentor to Arenas going back to their days at Golden State, when Smith was in the front office and Arenas was a young player. Richardson was also with the Warriors for most of that time.

One thing Smith said he's not concerned about is Arenas' off-the-court troubles.

Of bigger concern than the off-court problems was the three-time All-Star's constant knee problems, which limited Arenas to 47 games the previous three seasons. Healthy again, Arenas has averaged 17.3 points and 5.6 assists this year.

Magic coach Stan Van Gundy said point guard Jameer Nelson will remain the starter. And among Arenas, Richardson and Turkoglu, one player will have to come off the bench.

For now, the trades leave the Magic without a proven backup center.

"That's the one thing in the move that I think Otis and I both had concerns with," Van Gundy said. "We think it was worth the gamble."