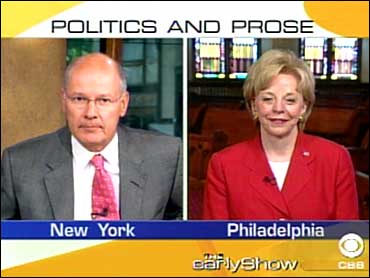 As the race for the White House starts to heat up, Lynne Cheney has been busy campaigning with her husband, Vice President Dick Cheney. But on Wednesday, she talked to The Early Show co-anchor Harry Smith about another one of her passions, the James Madison Book Award, which celebrates writers of history books that appeal to young people.

This year's recipient is Jim Murphy for his book, "An American Plague." The James Madison Book Award is given each July to the book that best represents excellence in bringing knowledge and understanding of American history to children in elementary and middle school.

"It's a wonderful story about a time in Philadelphia in the late 18th century when the yellow plague hit." Mrs. Cheney explained.

Philadelphia's yellow fever epidemic of 1793 was the largest in the history of the United States, claiming the lives of nearly 4,000 people. In late summer, as the number of deaths began to climb, 20,000 citizens fled to the countryside, including George Washington, Thomas Jefferson, and other members of the federal government, which was at that time headquartered in Philadelphia.

But Mrs. Cheney noted, "There were many heroes who stepped forward. One was the mayor of Philadelphia, who didn't flee the city when many higher-ups did. Another group that was very important in helping the citizens of Philadelphia was the free African-Americans."

She was promoting the book at the Mother Bethel African Methodist Episcopal Church, because, she noted, it was "founded by Richard Allen, one of the leaders of the free African society."

At the urging of Benjamin Rush, the support of Philadelphia's free black community was enlisted by Absalom Jones, Richard Allen, and William Gray, a fruit seller, who along with Allen and Jones had secured support to build the African Church the previous year.

Mrs. Cheney says, "The free African-American society, the members went out and nursed the sick when no one else would. They were willing to bury the dead. They cleaned up people's houses when everyone else had abandoned someone who was sick. They acted with real heroism."

Despite Rush's belief that blacks could not contract the disease, 240 of them died of the fever.

Mrs. Cheney noted, "As Richard Allen and Absalom Jones, the leaders of the free African society put it, they saw it as their duty to help their fellow mortals. So it's a really wonderful and uplifting episode in our past that I think kids should know about. And Jim Murphy has done a terrific job in this book of telling the story."

Asked if the 2004 political campaign would be "wonderful and uplifting," Mrs. Chenney said, "It would be a very good thing if we did.

"I know that my husband, the vice president, yesterday called the new nominee on the Democratic side, called Sen. Edwards and said congratulations to him and expressed his wishes for a spirited debate."

Questioned about talk show comments that the vice president has too much influence on the president and should make room for somebody else on the ticket, Mrs. Chenney said she can't see any circumstance for which her husband would step down.

"We're out there on the campaign trail," she says. "We were in Pennsylvania, Ohio, West Virginia this weekend, campaigning, having a great time bringing out the important issues, meeting enthusiastic crowds. It's a campaign that has begun, and we're looking forward to it."

Mrs. Cheney's husband recently came under fire for cursing on the Senate floor at Patrick J. Leahy (D-Vt.) Cheney said he had no regrets.

Asked what the vice president told her when he got home, Mrs. Cheney said, "When Dick is irritated, he usually says something like, 'Put a sock in it.' So I was actually surprised at this until I began to understand that his integrity had been called into question, and I think when that happens to someone, that a very strong response is one that is called for and well-deserved."

Though sock was not the word he used, Mrs. Cheney says, "I would point out, Harry, that the Democratic nominee for president has perhaps been pushed a time or two and used the same word. Though it seems to be of less interest."