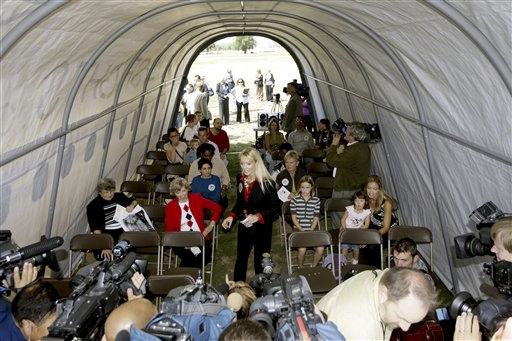 The image of Russia scared and mystified generations of Americans.

That mystique inspired a young and eager television producer, whose long-distance romance with both the country and an old friend took her halfway across the world. There, she set out for love and journalistic fame.

"Lying Together: My Russian Affair" is not just a story, but a memoir by first-time author and The Early Show producer Jennifer Beth Cohen.

In her writing, she parallels the contrasting romance, mystique, and darkness of post-Cold War Russia, to the same aspects of her own life, as she struggles in a foreign land with love and career, in the fast-paced world of television news.

Cohen left her "normal" life in New York City (an upper-middle-class upbringing, college education, and job as a TV producer) for the gritty streets of decaying Russia. For Cohen, the daughter of a psychiatrist and psychologist, her love affair with Russia began in junior high school when, as she explains, "Russia was the 'Evil Empire,' and I guess, like most adolescents, you're intrigued by things you're not supposed to be exploring. So there I went."

While she was in college in Massachusetts, she met and studied Russian with Kevin Dillon, a flawed romantic and newspaper writer. The two hooked up via e-mail years after graduation. Cohen, working in New York, was researching an international sex trade operation in Russia, and contacted her old friend, who by then was working as a newspaper editor in St. Petersburg. After weeks of e-mails and phone calls, Cohen was off to Russia, seeking journalistic fame and the romance of a lifetime.

Cohen's story is steeped in Russian culture. She describes the tough streets of old cities, the decaying economy, the crumbling of the Soviet empire, and its struggle toward modernization. Cohen augments her imagery and deeply personal thoughts with quotes and anecdotes from such classic Russian storytellers as Tolstoy and Dostoevsky, giving historical context while leading the reader deeper into a Russian state of mind.

The sex slave trade, crooked politicians and businesses, and organized crime are all part of Russia's "clichéd" struggle with reform. "Lying Together," while a personal account, is also proving to be relevant in the post-Cold War era, as it touches on such issues as black market nuclear trade and unrest in Chechnya.

But the greatest unrest in Cohen's world is her relationship with Kevin, whose struggles with chemical dependency and depression threaten the love, life, and success that she went halfway around the world to find.

Read an excerpt from Lying Together: My Russian Affair.

Is this a memoir?
Oh absolutely. It's a memoir. My standard response is like any memoir, like all memory it probably suffers a bit from blurry recollection. But at its heart it is true. And of course I changed names and places and certain details. And certain time frames actually. But it is a true story.

What is it about Russia for you?
That's going to be hard to give you in a [sound] bite. I started getting interested in Russian in junior high in the mid '80s. They actually offered Russian in school. And that was when Russia was the "evil empire" and I guess like most adolescents you're intrigued by things your not supposed to be exploring. So there I went.

Did you have to build in any dramatic arcs?
The story really did write itself. And in fact the most dramatic events are the most true. The scenes that people might find the most troubling are the scenes I wrote first, because I had experienced some traumatic things and needed to get them out. I couldn't go to therapy in Moscow, and I couldn't tell my friends and family what was going on. The book really began as a diary, not as a book.

This take places in '98, over how long a period?
It's about a year. About January to about December.

How has your family reacted? This is pretty personal stuff.
My father has been threatening to go into the witness protection program. But they are really proud. I was worried how they were going to respond. And when my mom finally read it, she said 'Are you crazy? I loved it!'

What does your husband Michael think?
Nobody wants to know the intimate details of their partner's past, but also he understands this is my past, and for better or worse it brought me to where I am now, which is a very happy place. And he can distance himself.

Now that the book is done, the experiences are in the past, how exciting is all the press?
Hahaha. You know the thing is, I think that on some level I didn't quite believe that I've done it. When I got my first newspaper review [ in the San Francisco Chronicle), it was so incredibly validating. It makes it real. Oh my god, I actually am a published author!