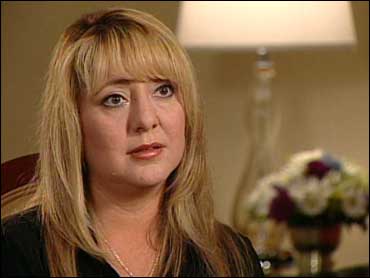 It was the cut heard round the world.

Exactly 15 years ago this week the world first heard the story of John Wayne and Lorena Bobbitt. John Wayne, an ex-Marine, was accused of coming home drunk and raping his wife. Lorena was accused of retaliating by cutting off her husband's penis while he was asleep.

Lorena went from anonymous to notorious - her story the subject of countless newspaper and magazine articles. Now in her first ever network morning show interview she discusses how she's using her notoriety to help others.

"All of a sudden, my private life is out in the open and it's an open book and a lot of people know my history," she told The Early Show "Sometimes I couldn't even go to the grocery store to buy food because I would be recognized."

Today, the once shy native of Ecuador who barely spoke English is a confident 39-year-old who works as a real estate agent and next month gets her hairdressing license.

"My self esteem is a lot better than it was years ago. I grew a lot," she said. "I learned to cope with this. I cannot have myself with a blanket over my head and not to live, might as well go into the mountains and forget everybody. I had to make a choice so I just said 'Hey, I have to keep going, this is my life.'"

Lorena is now a mother to two-and-a-half-year-old Olivia - and in case you're wondering, yes, there is a man - fiancé Dave Bellinger.

"We've been together for 14 years and he's just wonderful," she said. "He's my best friend and he is a good father. Before, when I was young, when I was married, I was really naïve and young, I didn't know what I wanted."

While Lorena has stayed out of the spotlight since a jury found her not guilty by reason of temporary insanity - ex husband John Wayne has sought it out - making numerous TV appearances and starring in several highly publicized adult films.

"That kind of did bother me that he was, you know, going up and trying to make money off a tragedy and you know that was a tragedy. I mean if he doesn't consider it a tragedy then he's wrong," she said.

John Wayne has also had several brushes with the law including a 2003 domestic violence conviction.

"I hope that he's definitely seeking help. If he needs help because he does need help, you know, he keeps on abusing women and I'm working on my goal and I'm trying to focus on my life and I do have a new life," she said.

The focus of her new life is Lorena's Red Wagon - an organization which provides funds to abused women in shelters who seek mental health counseling.

"They've gone through a lot, and I know that," she said. "Who knows that better than me?"

She hopes one day to open her own shelter and prevent women from making the same mistakes she did.

Lorena and John Wayne Bobbitt divorced in 1995 after six years of marriage. She said that she hasn't spoken to him since.