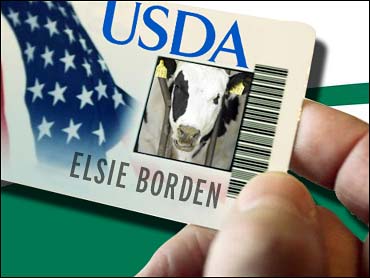 The government is looking at making farmers, feedlots and packinghouses track every cow, pig and chicken in the country from birth through slaughter by 2009, Agriculture Secretary Mike Johanns said Thursday.

The discovery of mad cow disease in a Washington state Holstein is driving the push to a mandatory nationwide system of animal identification.

The goal is to limit the scope of disease outbreaks by allowing authorities to track down an exposed animal or bird within 48 hours, Johanns said.

The Agriculture Department proposes beginning with voluntary registration of cattle, hogs, poultry and other livestock, then shifting to mandatory reporting of livestock movement by January 2009.

The proposal floated Thursday is not official notice that government rules will change, and the plan could change depending on response from the livestock industry or others, Johanns said.

While the current goal is a mandatory system, "somebody may convince us otherwise," Johanns told reporters. Still, Johanns said it would be tough for a system that has gaps in identification to work.

Producers, concerned about keeping their records confidential, have protested the idea of a government-run identification system. Instead, they've argued it would work better for the industry to maintain a voluntary clearinghouse of information and give state and federal officials limited access to it.

Efforts to keep records confidential are a key part of the new proposal, which seeks to exclude records from the federal Freedom of Information Act, said USDA chief economist Keith Collins.

Also in dispute is who should bear the cost of such a program. Collins said that states and the livestock industry should share the cost with the Agriculture Department.
By Libby Quaid