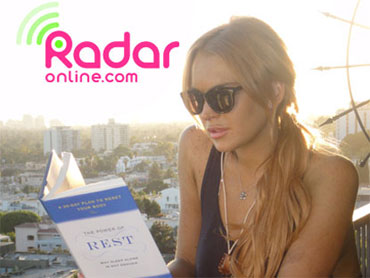 Lindsay Lohan is reportedly back in rehab.

As expected, the actress is said to have voluntarily checked herself in for treatment -- another attempt to get clean and perhaps stay out of jail.

But before she went, there was what looks to some like one more shot at image rehabilitation.

Lohan was photographed on the terrace of her West Hollywood apartment wearing sunglasses, looking relaxed, a self-help book in hand. The RadarOnline photos are the latest of the troubled starlet before she checked into rehab on Tuesday.

But are they candid shots of the actress at peace -- or something else?

Jason Kennedy, a correspondent for E!, told CBS News, "The photo looked staged to me. You look at the lighting, you look at how the book is strategically placed so you can read the title of it. She just checked into rehab and she's reading a self help book? It looks a little fishy to me."

The book is "The Power of Rest," whose author, Matthew Edlund, who spoke exclusively to "The Early Show." He says that, if the photos are staged, he had nothing to do with it.

The rebuilding has already begun -- according to reports, Lohan is now in a treatment facility somewhere in Southern California. Exactly where is unknown, but wherever she is, she's expected to remain there until her next date with the judge, on October 22.

Kennedy said, "Hopefully, she really gets changed by all this. Hopefully she can just hang on to what's left of her career at this point."

But what about her freedom? Lohan is in this mess because she failed a drug test while on probation, so getting clean could be key to staying out of jail.

Robin Sax, a former Los Angeles County prosecutor, said, "If the judge is convinced that the root of her problem is a drug problem, he will likely continue on a course of rehab for her instead of sentencing her to additional time in jail."

Lohan, 24, spent the weekend rehabilitating her image by visiting families in a Los Angeles homeless shelter. Now she'll try -- for the fifth time -- to rehab her drug problem.

Lohan served only 13 days of a 90-day sentence for violating her probation on 2007 DUI charges.