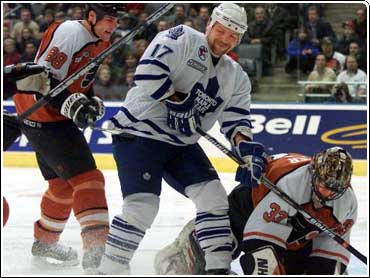 The Toronto Maple Leafs had a slow start that even they couldn't dig out from.

Eric Lindros scored two goals and the Philadelphia Flyers staved off Toronto's third-period rally to hang on for a 4-2 victory Wednesday night over the Maple Leafs.

Toronto, which came back to win or tie four of its last seven games, outshot the Flyers 16-10 in the third period. The Maple Leafs narrowed the margin to 3-2 on Mats Sundin's breakaway goal, but couldn't produce the equalizer.

Toronto has trailed after the first period in seven of 10 games and have led just twice in 15 games heading into the second.

"We're missing something that causes us to start as slowly as we do," said coach Pat Quinn of the Maple Leafs, who trailed 2-0. "A lot of the fault is we try to do too many things early in the game. A lot of individuals have made errors lately and that has cost us goals."

Simon Gagne and Mark Recchi scored for Philadelphia, which won just once in nine games prior to the All-Star break.

Toronto had four power-play opportunities in the first period alone, yet were outshot 16-5. Recchi scored the winning goal at 12:41 of the second period and Lindros got his second of the night for insurance with 1:46 remaining.

Dmitri Khristich got his 10th goal on a second-period backhand for Toronto.

"We're almost too eager to get a lead in the first period," Sundin said. "We had so many power play chances, but didn't capitalize. We'll be fine if we cut down on our mistakes."

Philadelphia, which has three games in hand, moved within foupoints of second-place Toronto in the Eastern Conference. Philadelphia killed off all seven Toronto power plays.

"We did a great job defensively," said rookie goalie Brian Boucher, who made 26 saves. "That's the thing with penalty killing, it's either going to kill you or you get energy off it. It gave us momentum tonight."

Lindros opened the scoring at 16:02 of the first period on the power play when he fired a wrist shot from 35 feet over the Curtis Joseph's glove.

Then with Toronto on the power play, Joseph stopped Gagne on a breakaway, but the puck looped through the air and fell down just across the goal line with less than a second remaining.

"We probably had double the amount of scoring opportunities they did," Neilson said. "We had a bigger edge than the score showed."

Recchi was credited with the winning goal when his centering pass hit Joseph's stick and went in to give the Flyers a 3-1 lead. Just 35 seconds earlier, Khristich got Toronto on the board when his backhander beat Boucher.

Defenseman Gerald Diduck had one assist in his season debut for the Maple Leafs. He was signed from Canada's national team as an unrestricted free agent on Jan. 28.