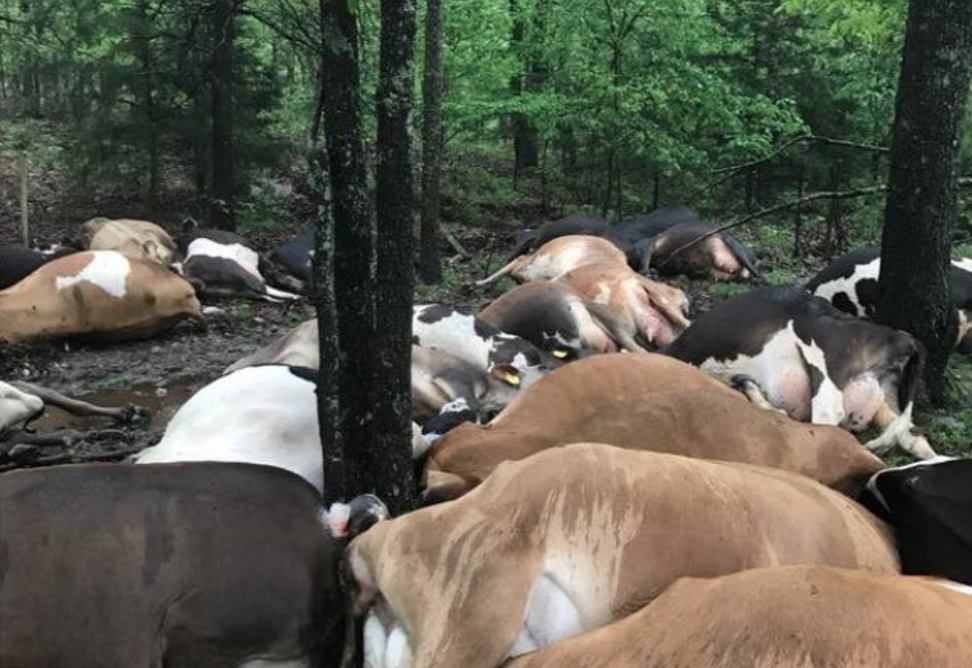 In Missouri, it's not uncommon to hear an occasional roar of thunder and flash of lightning, especially this time of year. The area has recently been hit with some severe storms and flooding.

So when Springfield farmer Jared Blackwelder and his wife, Misty, heard some crashes Saturday morning after feeding the dairy cows, they didn't think anything of it.

But as Blackwelder headed back to the pasture to fetch the cows for their evening milking, he walked upon a devastating sight: his 32 dairy cows piled on top of each other, lifeless on the mulch.

They had been struck by lightning.

"He went out to bring the cows in and that's when he found them," Stan Coday, president of the Wright County Missouri Farm Bureau, told CBS News. "It's a common occurrence. It does happen. The thing that made this the worst was just the sheer number of cows that were affected."

A local veterinarian who performed the inspection, confirming lightning killed the cows, told Coday that until now, six was the most he'd ever seen.

The cows were most likely grouping up under the trees to protect themselves from the storm.

"You're at the mercy of mother nature," Coday said, adding that he himself lost a cow to lightning several years ago.

Even though farmers understand the risk, Coday said such a loss is very painful.

"It's not like they are pets. But the ones I'm milking, I've raised every one of them," Blackwelder told the Springfield News-Leader. "Dairy cattle are a little different because you mess with them twice a day. It knocks you hard."

It's also a devastating loss financially.

Blackwelder told the News-Leader he has insurance, but he's not sure if it will cover his total loss. He estimates each certified organic cow was worth $2,000-$2,500, a total loss of more than $60,000.

"Most producers don't carry insurance," Coday said. "If you lose a cow you've lost everything."

Responding to questions from local residents, Coday, who raises beef cows, wants to clarify that meat from Blackwelder's cows could not be salvaged.

"Those animals are damaged and of course they had been there for a few hours when he found them," he said. "In processing an animal, there's a process that needs to be gone through. They wouldn't have been fit for human consumption."

With Missouri's warmer climate, Coday added most farmers don't have a separate building to house their cows.

"This was nothing that he had any control over," Coday said.