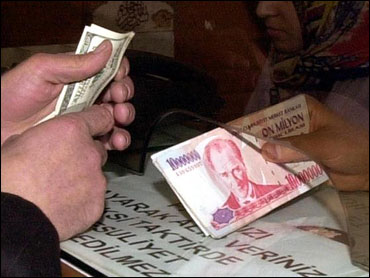 Holdout halfback Dorsey Levens might want to get into training camp at once. His leverage is slipping thanks to fill-in Travis Jervey.

"Dorsey's probably my closest friend on the team, I wish he was here," said Jervey after leading the Green Bay Packers to a 31-7 exhibition victory over the New Orleans Saints on Saturday night.

"He's probably thinking he could have done the same thing," Jervey said.

Jervey's 44-yard scamper off left end put Green Bay ahead 21-0 with five minutes left in the first half. He also had scored on a fourth-and-2 handoff.

"The guy's hungry," teammate Antonio Freeman said. "With Dorsey out of camp, he's expected to be the triggerman right now."

In two exhibition games, Jervey has been just that, rushing 14 times for 172 yards.

"He's doing a good job," Packers coach Mike Holmgren said. "With each time he carries the ball, he's going to get that much better. It gives me a better feeling about our situation right now, it really does."

Jervey, a fourth-yaer speedster from The Citadel whose stock in the free agent market fell when he was accused of marijuana possession -- charges that were later dropped for a lack of evidence -- returned to Green Bay for a one-year tender of $397,000.

Jervey says the regrettable incident actually is a blessing because he's getting his chance to prove to NFL teams -- including the Packers -- that he can be a starting running back and not just a special teams star.

"This summer I decided special teams is not enough," Jervey said.

Levens, a fellow Pro Bowler, has decided the Packers' offer is not enough.

With Levens holding out for $5.3 million a year, about $1 million more than the Packers are offering, it's Green Bay that's been blessed by Jervey's unexpected return.

The Pakers' initial plan was to team free agent Rayont Harris with Levens to form one of the most potent backfields in the NFL this season.

But Jervey is thrusting himself into the mix.

"Even when Dorsey comes back, I want to prove to them they need to put me in anyway," he said.

Harris, who added 50 yards and a TD on 13 carries, insisted the Packers can't do without Levens.

"You can't take what two guys have done in the preseason and even compare it to what Dorsey has done leading this team the last two years and going to the Pro Bowl," Harris said.

The Saints had their hands full with Jervey and Harris as it was.

"They fooled us," Saints coach Mike Ditka said. "They ran left and right."

And over and through.

Brett Favre, who was just 1-of-5 for two yards and a fumble against Kansas City last week, completed all seven of his passes, for 86 yards and a score, after getting hammered by blitzing linebacker Brian Jones on the first snap.

"We looked like the Packers we're supposed to look like," said Derrick Mayes, who set up two TDs with impressive catches near the goal line while subbing for Robert Brooks, who has a broken finger.

Mayes hauled in Favre's 30-yarder as he tumbled out of bounds at the 2 to set up Mark Chmura's TD catch, then made a spectacular 19-yard grab while sliding out of bounds on the other side to set up Jervey's 2-yard TD run that made it 14-0.

Safety Chris Hewitt intercepted David Klingler's pass and returned it 25 yards for a TD late in the third quarter for New Orleans' only points.

After Favre left, the Packers (2-0) turned the ball over on consecutive plays, but the Saints (0-1) went minus-5 yards on seven plays. Doug Brien was wide left from 41 yards after Sammy Knight's interception of Doug Pederson's pass. After Rob Kelly forced and recovered a fumble by Jervey at the Green Bay 34, Billy Joe Hobert misfired three times.

Hobert, starting for the injured Heath Shuler, was 7-of-16 for 81 yards.

Fred Weary fumbled away two punts for the Saints. After the second, Brett Conway kicked a 32-yard field goal to make it 24-7.

Packers safety Mike Prior recovered a fumble and also intercepted Danny Wuerffel's pass at the Green Bay 6, which led to Harris' 1-yard TD run with 2:08 left.

"If this was a litmus test, we've got a long way to go," Ditka said.