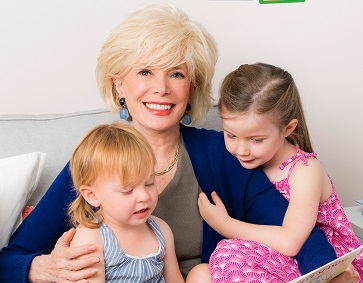 For award-winning journalist Lesley Stahl, the most vivid and transforming experience of her life was not covering the White House, interviewing the heads of state or any of her stories as a correspondent for "60 Minutes."

It was becoming a grandmother.

In her new book, "Becoming Grandma: The Joys and Science of the New Grandparenting," Stahl explores how grandmothering changes a woman's life, based on her personal experiences and interviews with friends like Whoopi Goldberg, colleagues like Diane Sawyer, as well as the proverbial woman next door.

In this excerpt from the first chapter of her book, Stahl recounts the birth of her first grandchild.

It's never too late to have the best day of your life.

Throughout my career, I worked at suppressing both my opinions and my emotions. I was out on the streets of New York on 9/11 and held myself together. I walked the alleys of Sadr City and once raced to a café in Tel Aviv minutes after it was leveled by a suicide bomber without allowing my fears to surface. I've asked embarrassing questions without embarrassment. And I've sat opposite mothers of dying children, teenagers who had been abused, and grown men and women who had suffered the indignities of injustice--without breaking down in tears or exploding in outrage. I thought I had become the epitome of self-control.

Then, wham! My first grandchild, Jordan, was born on January 30, 2011. I was jolted, blindsided by a wallop of loving more intense than anything I could remember or had ever imagined.

At the very same time, my mother, Dolly, was dying. It was a disconcerting conjunction, to say the least. Although she had spent the last forty-five years complaining of one illness after the next, it was now for real. She might not live long enough to hold her great-grandchild. In no time, my diligently buried emotions burst out like kettle steam.

Dolly had fallen and broken her hip, which set off her rapid decline. My husband, Aaron, and I were with her at the hospital when our daughter, Taylor, called from Los Angeles. All she said was, "They started." Aaron and I kissed my mother good-bye, assuring her we would call as soon as we knew anything. We drove to her house for our clothes and on to Logan airport to catch the next plane to LAX. Our only child was in labor, four days early.

On the plane I fought off waves of fear: Would the baby be healthy? If something went wrong, would Taylor have to give up her career? For months I'd been pushing away such thoughts, those grandma gremlins. At the same time, I reproached myself for leaving Dolly. Would she be okay until I got back? We hadn't had the kind of even-keeled relationship I have with Taylor. When Dolly turned ninety-three a few months before, I told her I never thought she'd live that long, and she said: "Well, you don't have to say it so regretfully, ya know." Her dig, meant to be funny, was a reminder of the old rancor between us. As we both aged and mellowed, we became friends; now it pained me to leave her like that, in the hands of nurses at the hospital.

When we landed, Taylor was back home. She had gone to the hospital too early, and now she and our son-in-law, Andrew Major, were graphing her contractions on an iPad. I was sailing out of body. I couldn't believe it: my baby--having a baby. How could this be? She was my special Taylor, calm and imperturbable as always. She was signaling that's what she needed from me. I would have to quiet my nervous excitement.

At five the next morning, Taylor and Andrew raced back to Cedars-Sinai Medical Center. By the time Aaron and I got there, Taylor was already in a "birthing room," which was spacious and light with a panoramic view of the Hollywood Hills. And yes, we could see the sign! Monitoring tubes dangled; a nurse bustled about. Taylor had already been given an epidural, so we would have no Murphy Brown wailing, though I doubt Taylor would've wailed even if she'd gone without. Histrionics are simply not on her emotional keyboard.

She seems to have been born with something called hyperthymia. Roughly translated, it means "perpetual happiness." I have a daughter who didn't go through the usual teenage miseries or years of hating her mother (I confess to both). We had no melodrama; doors weren't slammed. She was so even-tempered as a child, I was worried. "It's just not normal," I told Aaron. "She must be repressing. Her head'll blow off one day. She needs to see a child psychiatrist."

"What'll you tell him?" he asked. " 'My daughter suffers from being too happy'? Are you kidding?"

Eventually I talked to a shrink myself, who assured me there really are people out there, including teenage girls, who are never moody. Imagine.

So Taylor's equanimity in the birthing room seemed normal. When the contractions accelerated, it was my stomach that churned: "Where's the doctor?" I asked the nurse, with an edge. "Why isn't he here?"

"Oh, we never wake up the doctor early on Sunday," she explained.

As Taylor lay in bed, uncomfortable but composed, Andrew, Aaron and I followed her cues and forced ourselves into a state of artificial nonchalance. But we are who we are: just as I was about to let loose my pent-up anxiety with a bellowing, "Where the hell is the goddamn doctor?," in he sauntered, like a reporter meeting a deadline by seconds.

"You're doing great," he assured Taylor. "I've been monitoring you at home on my iPhone." Good golly. Look how far we've come from house calls. Now doctors treat you from their beds!

He walked Andrew over to the window to show the father-to-be his cool contraction app. They chatted and swapped other new apps like two friends in a bar until Taylor said: "Hey, fellas, over here. Isn't this my show?"

Fifteen minutes later, the doctor announced: "Showtime!" And asked, "Will your parents stay?"

To my disappointment, Taylor said no. So Aaron and I slouched off to the empty waiting room. It seems that many of the births at Cedars-Sinai are Caesarean, by appointment, something Taylor was offered but passed on. Doctors like their Sundays off. As far as we could tell, only one other baby was born in the hospital that morning.