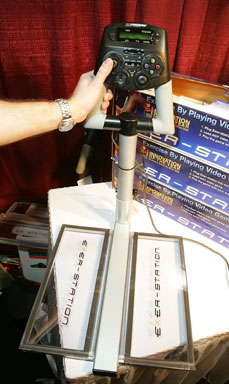 Fredrik Modin scored the winning goal with 6:25 left in the third period as the Toronto Maple Leafs ended a four-game losing streak with a 3-2 win over the St. Louis Blues on Wednesday night.

Modin took a weak shot from just inside the blue line that deflected off the chest of St. Louis goaltender Grant Fuhr before bouncing over his shoulder and into the net.

Derek King, with his first goal in 10 games, and Igor Korolev also scored for the Maple Leafs.

After giving up three shorthanded goals in their past two games, the Maple Leafs scored one of their own with their first shot of the game.

Korolev intercepted a pass in the Toronto zone and broke away from the Blues' defense to score his 15th at 4:21 of the first.

The Maple Leafs trailed 2-1 heading into the third period, but tied it on King's power-play goal at 1:06. Toronto is now 2-26-3 when trailing after two periods.

Toronto goaltender Glenn Healy needed to make only 15 saves in picking up his second win of the season (2-7-2). Fuhr finished with 18 saves for St. Louis.