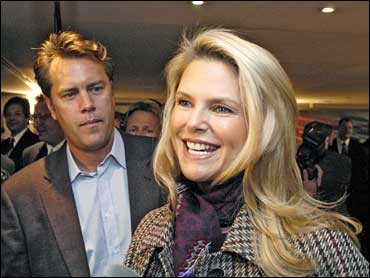 The divorce proceedings between Christie Brinkley and Peter Cook continued Monday, with the couple fighting over custody of their daughter Sailor, 9, and son Jack, 13.

Cook's attorney, Norman Sheresky, told The Early Show that he believes Brinkley and Cook were once good co-parents, but that she now she wants to push him out of the children's lives. Brinkley's attorney, Robert Cohen, said that's not true.
Sheresky believes that Cook will have no problem establishing that he's been a good father.

According to Sheresky, Brinkley and Cook were "terrific co-parents," and in an ideal world they should continue to bring up the children together.

"What happened is Christie got real mad and she doesn't want to co-parent anymore. Even if it means her children don't have two parents, that's okay by her. It's cruel and it's silly," he said.

Sheresky said that the trial shouldn't have been made open to the public.

"I don't know any good parent in the world who would invite their children to sit in the courtroom, which is precisely what Christie has done," he said.

Cohen said the open courtroom is a non-issue.

"What Peter Cook has wanted to do here was spread rumors and false statements and by innuendo try the case outside the courtroom and into - in the media," Cohen said. "Frankly, we didn't seek to declare the court open - courts are open. They are open. All custody cases are open. So that's not an issue. Frankly, it's another smokescreen created by Peter Cook."

Cohen did not deny that Brinkley is angry, noting "every spouse in a situation like this is angry."

But, Cohen said, Cook has seen the children "as well he should" during their court-arranged visitation schedule since the couple separated in July 2006, and that he will continue to see them according to the schedule.