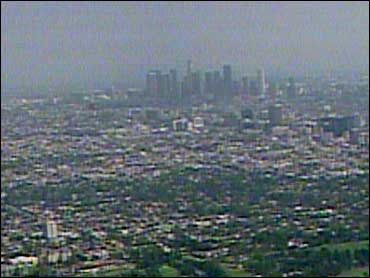 A blackout hit a large portion of the Los Angeles area Monday afternoon, snarling traffic at intersections and trapping people in elevators.

The city was investigating the cause and extent of the outage. But Sgt. Catherine Plows, a police spokeswoman, said terrorism was not suspected.

Electrical power was knocked out shortly before 1 p.m. local time after two power surges, and traffic was snarled at intersections throughout the city when stop lights went dark. The lights also went out at downtown high-rises.

CBS News Correspondent Vince Gonzales reports although no one is sure of the cause, CBS News has heard a wire may have been cut or that mechanical problems in a substation may have caused a cascade effect, causing breakers to trop and power to go out across the city.

Gonzales also reports that flights going in an out of Los Angeles International Airport flights were not affected, but areas as diverse as Korea Town, North Hollywood and the San Fernando Valley have been affected.

The Police Department went on "full tactical alert," meaning no officers were allowed to leave duty.

The blackout came a day after ABC aired a videotape of a purported al Qaeda member making terrorist threats against Los Angeles and Melbourne, Australia, on the fourth anniversary of the Sept. 11 attacks.

Heavy usage on hot days can lead to blackouts. But the weather in Los Angeles was not unusually hot Monday.

An official with the city Department of Water and Power said it appeared the problem began when two power receiving stations failed. That forced several larger generating stations to shut down, according to Robert Rozanski, chief administrative officer.

The receiving stations get high-voltage power from the generating stations and convert it to lower voltage so that it can be used throughout the city.

"We are doing everything we possibly can to find out the source of the problem," Rozanski said.