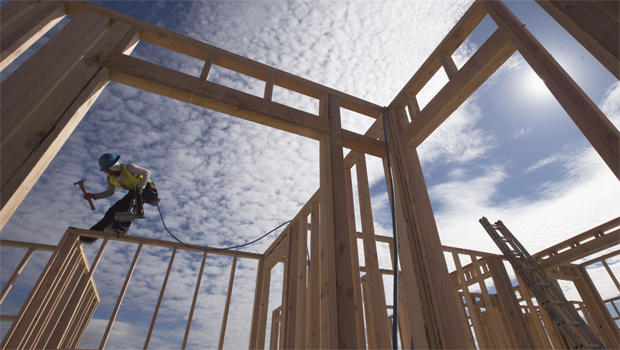 The HELP WANTED signs are up, both figuratively and literally, in the wake of Hurricanes Harvey, Irma and Maria. There's a lot of reconstruction to be done -- and not enough trained workers to do it. Our Cover Story is reported by Mark Strassmann:

It's been a month since Hurricane Harvey devastated the city of Houston and Southeast Texas. Damage estimates go up to $190 billion. The cleanup has begun, but a major shortage is looming for the rebuilding effort. It's not a lack of will, or money; it's a lack of skilled labor … a national shortage that's reaching a crisis stage.

Nearly 40 years ago, America's "do-it-yourself" work ethic became the stuff of primetime television, when "This Old House" took to the airways on PBS. Since 1979, master carpenter Norm Abram, the show's unlikely star, has taught two generations of viewers how to build things.

"I didn't have the best clothes; my backpocket had holes in it, I had a crazy-looking cap," he said of an early project where he used "scaffolding that would never pass OSHA controls today!"

One Christmas, when Abram was a kid, his father gave him a Handy Andy toolbox. It opened his eyes to the joys of working with his hands.

"A truck pulls in, dumps a big load of lumber there, and all of a sudden the carpenters come out and take saws and hammers and start cutting material. And a house just comes to life," Abram said. "And it's not as easy as it looks, but it's very rewarding."

It's a reward Abram worries fewer and fewer Americans are experiencing.

"It's the biggest thing I hear from contractors," he said. "'What's your biggest problem?' 'I can't find good help.'"

America's economy has a growing labor crisis -- a shortage of skilled construction workers. These men and women -- carpenters, plumbers, electricians and masons -- put a roof over your head. They're getting harder and harder to find, at a time when -- with two devastating mainland storms in the past month -- they've never been more needed.

"Over the last four years, we've seen rising rates of open jobs," said Robert Dietz, chief economist for the National Association of Homebuilders. "In other words, there's a help wanted sign put out by the builder or the remodeler, and they simply can't fill it."

We talked to Dietz about these "Made in America" jobs, a traditional front door to the American dream.

"Over the decades as we've gone through different rounds of infrastructure development, building the nation's suburbs, the highways and the rest, those construction jobs have been a critical part of building a middle class," he said. "The challenge right now is that we simply do not have enough people who are ready and willing and able to join the construction industry."

The 2008 recession hit on homeowners, and homebuilders, hard. More than 1.5 million residential construction workers left the industry. Some changed careers; others simply retired. Many immigrant workers went home and never came back because of tougher immigration laws.

Add it all up, and since the Great Recession, the industry has recovered fewer than half of those jobs

"So, if we don't get those workers, housing costs ultimately are going to be higher," Dietz said, "and that's going to price out workers from being able to buy homes."

The construction industry has tried raising wages. It is also turning to pre-fabricated homes to make up for the labor shortfall. But it's not enough.  By one estimate, for every skilled worker entering the workforce, there are five who retire,

When asked what his sons feel about his line of work, Henry Jackson, a construction manager in Baltimore, replied, "They think it's grueling, back-breaking work and they don't want to do it."

"And what do you tell them?" asked Strassmann.

"I tell 'em that it is, but it's very rewarding at the end of the day," Jackson replied.

The attitude of Jackson's kids is typical. A 2017 survey of career-minded young people found that only three percent were interested in a construction trade.

"We have companies out there that will, literally, stand in line waiting for kids to interview them to offer them jobs," said Kurt Adam, assistant superintendent at Lehigh Career & Technical Institute near Allentown, Pennsylvania. This high school teaches 41 different trades. Graduates leave with a specific skill -- plumbing, welding, carpentry -- and some leave with jobs that can start at $60,000 a year.

Strassmann said, "One of your kids told me the perception they have to overcome is that Tech is for stupid kids."

"Absolutely," said Adam. "And it's been that way forever. I graduated from high school in 1979 and that was it. If you were lazy, if you were stupid, you went to Tech. And that still exists today out there. And we fight that every day."

"But do you think the general public understands what you do?"

"They do when they need a plumber to come fix their toilet at midnight on a Saturday, and he's getting paid $75 an hour to come fix a toilet or come fix your water heater because it broke. That's when they get it. And that's a challenge."

Seventeen-year-old Jody Ann Young's career path surprised even her: "I didn't come to LCGI to be a plumber. I'm a girly girl, as you can see. But when I walked into the plumbing lab, I just got so excited about, you know, the things that plumbers do."

"And have you thought about college?" Strassmann asked.

"I have. I want to finish the apprenticeship program, take my journeyman's, then take my license to be a master plumber. And then I feel like I should go to college to take business classes and own my own business one day."

"You have a plan, as a high school senior. How many of your friends can say that?"

"Not many!" Young laughed.

Seventy percent of graduating high school seniors head off to a two- or four-year college where, in addition to their studies, many learn how to build debt. On average, college grads leave school with $37,000 in student loans.

It drives Mike Rowe -- former host of the TV show "Dirty Jobs" -- crazy. He believes not everyone has to go to college.

For years, Rowe has shown us that "dirty" jobs are also important jobs. "The popular portrayals of blue-collar work are so predictable, they're so hackneyed -- if there's a plumber on TV, you know, he's 300 pounds and he's got the giant butt crack thing going, right?" Rowe laughed. "You just know it, he has to."

Since 2008, the Mike Rowe WORKS Foundation has boosted awareness about the skilled labor shortage.

"So, years of predictable portrayals, coupled with well-intended parents and guidance counselors trying to elevate one form of education at the expense of others, have, in my opinion, conspired to marginalize an entire chunk of the workforce," he said.

Which brings us back to "This Old House," now in its 39th season. For the first time, this season will showcase three young apprentices, as they learn how to build a career. The show hopes to build an awareness that America's construction trades need a new blueprint.

"We want to make awareness of that shortage, try to explain why it happened," said Abram, "But more than anything else, we want to empower and encourage young people to take a shot at the skilled trades."

And not seen on TV, but in kitchens and basements around Pennsylvania, Jody Ann Young graduated in May. She is now a junior plumber … building for her future.