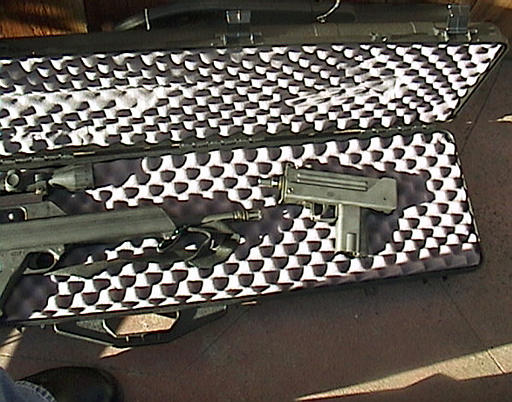 A man in prison for vehicle theft is suspected of planning a significant attack, say authorities who uncovered an arsenal of semiautomatic assault weapons, ammunition, pipe bombs and barrels of jet fuel.

Authorities have not been able to identify any targets, and the man has refused to talk to investigators, said sheriff's Sgt. John Demooy.

"He was definitely planning on targeting a structure, location, individuals, and would have created significant damage," Demooy said.

The Bureau of Alcohol, Tobacco and Firearms is investigating John Noster, 38, for firearms and explosives violations and plans to present its findings to prosecutors, said spokeswoman Latese Baker.

Noster was arrested in November during an investigation into purchases of vehicles using assumed names.

The guns, ammunition and cash were in a garage "with a $3 padlock on it," Demooy said.

Noster pleaded no contest to one count of grand theft auto on Jan. 14 and was sentenced to 16 months in prison but was given credit for 120 days served, district attorney's spokeswoman Sandi Gibbons said.

"He was white-collar professional, seemed like an intelligent man and I believe if charges are brought against him ... that he'll be vindicated in court," said Nicholas Khan, an attorney who represented Noster in the theft case.

Authorities also found a handwritten note about options for destroying a building by either dropping an "instrument" from a gyrocopter or placing it nearby. A gyrocopter is a tiny aircraft that looks like a helicopter but is pushed by a rear-mounted propeller while the unpowered overhead blades create lift.