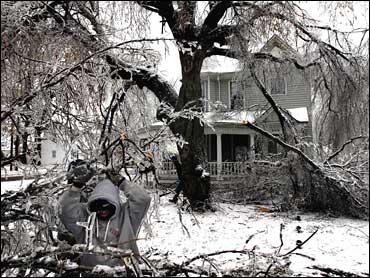 She kept right on riding, and winning, and on Monday became the first woman inducted into the National Racing Hall of Fame, an honor that she told CBS News Early Show anchor Bryant Gumbel "means everything in the world to me."

In a TV interview just hours before her induction, Krone said, "Everything I did my whole life - I love racing and enjoyed everything about my career - and then to be honored by everyone in racing is just - life can't get any better than this."

When she accepted the honor later Monday, she thanked everyone who helped her.

"I wish I could put every one of you here on a racehorse at the eighth pole, so you could have the same feeling that I did," Krone said. "I got to do something I love so much every day. And today I know for sure that life doesn't get any better."

Krone was introduced by the man who trained her, Chick Lang. He told of the day Krone showed up in Maryland, bringing four cardboard boxes tied with a rope.

"That was her luggage," Lang said.

Krone survived many serious injuries from spills during her 19-year career. She rode 3,545 winners, her mounts earning more than $81 million before her retirement in 1999. Of those wins, 277 were in stakes races, 119 of them graded stakes.

She was the only woman to win a Triple Crown race, on Colonial Affair in the 1993 Belmont Stakes. She also won riding titles at a spring and a fall meeting at Belmont Park and was the leading rider at Gulfstream Park three times.

Although other riders have ridden more winners and won more purse money than Krone, she was much talked about, and her celebrity broke the bounds of racing.

She accepts the injuries that cut her career short with equanimity: "That's just how things go sometimes. There was a lot of adversity and I gained a lot of inner strength and at the same time, I had a lot of good things."

Krone, 37, began by thanking her mother, Judi, who died last year of cancer. She told of the first time her mother took her to Churchill Downs, where she was refused entry because she wasn't 16 yet. Her mother went to a grocery store and forged her birth certificate.

"I want this to be a lesson to all kids everywhere," Krone said. "If the stable gate is closed, climb the fence."

She told Gumbel earlier that she was sure her mother would be with her in spirit. "There were a couple of people this year that I've really would have enjoyed to have there with me but they all went to heaven. But I'm not going to mention it at the end because I'm afraid I'll cry."

The 52-year-old Drysdale, who trains Kentucky Derby winner Fusaichi Pegasus, has trained five champions since going out on his own in 974, and his horses have earned more than $50 million.

The Englishman, whose stable is based in California, beat out fellow nominees Willard Proctor and Richard Mandella.

Among those Drysdale thanked was Hall of Fame trainer Charlie Whittingham, for whom he once worked.

"Mostly, (I want to thank) these four-legged creatures that have given my life such passion," Drysdale said.

A.P. Indy, the 1992 Horse of the Year trained by Drysdale, was inducted in the contemporary male category for horses retired from racing for at least five years.

Winning Colors, who became the third filly to win the Kentucky Derby in 1988, was elected in the contemporary female category.

Needles, the 1956 Derby champion, was elected in the horse of yesteryear category.