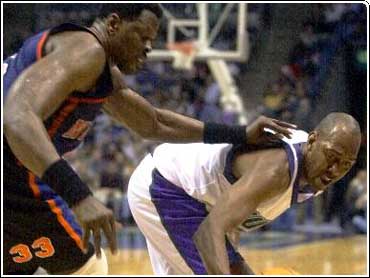 Even with a six-man rotation, the New York Knicks were getting big contributions from their bench.

Latrell Sprewell scored 23 of his 27 points in the second half as the shorthanded Knicks, motivated by David Wingate's fiery halftime speech, rallied from a big deficit for an exhilarating 109-103 win over Milwaukee Wednesday night.

"That was nothing about me," coach Jeff Van Gundy said of the Knicks' biggest comeback since February 1997. "That was about them finding a way to get themselves back in the game, and we did it when guys were dead-tired."

Trailing 62-45 at halftime, New York got a pep talk from veteran forward Wingate, who was activated off the injured list earlier in the day but didn't play. The Knicks looked like a different team after the break, hitting the shots and grabbing the rebounds they missed in the first half.

"Gate made a great speech at the half," Patrick Ewing said. "He told us to get our butts in gear and take it basket-by-basket to get the win."

"That just shows what we're capable of when we play with a lot of passion and desire," said Allan Houston, who scored 22 points on a sore ankle. "Hopefully a win this big will give us some momentum after the All-Star break."

Ewing had 20 points and 16 rebounds for the Knicks, and Charlie Ward added 21, hitting five of six 3-pointers. Sprewell and Ewing played 44 minutes each, and Houston played 46 as New York won for the third time in four games.

The Knicks played without regulars Marcus Camby, Larry Johnson and Chris Childs, and just seven players saw action for New York. The Knicks mostly went with a rotation of starters Sprewell, Ewing, Ward, Houston and Kurt Thomas, with John Wallace off the bench.

The Knicks' jubilant locker room contrasted with the funereal pall over the Bucks, who head for the break on their first three-game losing streak of the season. Milwaukee's loss and Detroit's win over Toronto dropped the Bucks into eighth place in the Eastern Conference standings.

Glenn Robinson, an All-Star for the first time in his career, scored three points after halftime Wednesday and stormed out of the locker room after curt replies to a few questions.

The Bucks, who have lost four of five, finished a three-game homestand with three discouraging defeats. The Bucks lost their composure and their shooting touch about the same time Sprewell, a Milwaukee native, began making his shots in the second half.

"Those are three disappointing games," said Ray Allen, who had 24 points. "We had opportunities in all three. We made a lot of young mistakes."

Sprewell was the catalyst for the Knicks' comeback, making big plays on both ends as New York scored 11 straight points in the closing minutes.

New York trailed by 17 at halftime but closed the gap in the third quarter as the Bucks' shooters cooled. In the fourth, the Knicks tied the game on five consecutive possessions, but each time the Bucks answered with their own score.

Milwaukee took a 95-92 lead with 5:12 left on Allen's reverse dunk, but Sprewell and Ewing combined to score the next 11 points on a variety of jumpers, dunks and free throws.

Allen had 24 points for Milwaukee. Thomas had 16, while Robinson had 19 when Sprewell shut him down after halftime.

In a game of roller-coaster runs and inconsistent shooting, the Bucks took a 59-40 lead late in the first half with torrid shooting. Milwaukee made 59 percent of its shots before halftime and had a 15-2 run late in the second quarter, led by 16 points from Robinson and 15 from Allen.