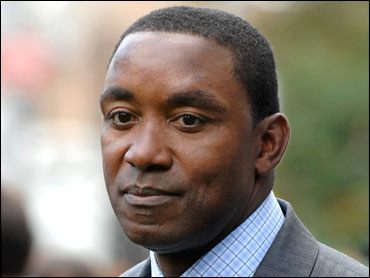 A verdict earlier Tuesday found that Knicks coach Isiah Thomas subjected Browne Sanders to unwanted advances and a barrage of verbal insults, but that he did not have to pay punitive damages.

The jury did find, however, that Madison Square Garden committed harassment against the woman and decided she was entitled to punitive damages.

The Garden said it would appeal.

Both Thomas and MSG were also found guilty in creating a hostile environment, while a guilty verdict was reached on the charge of retaliatory firing against Garden officials, CBS station WCBS-TV. Thomas was found not guilty on two charges, however, including aiding and abetting in retaliation against Sanders.

"I'm innocent, very innocent, and I did not do the things she has accused me in this courtroom of doing," Thomas said afterward. "I'm extremely disappointed that the jury did not see the facts in this case. I will appeal this, and I remain confident in the man that I am and what I stand for and the family that I have."

"We believe that the jury's decision was incorrect and plan to vigorously appeal the verdict," Madison Square Garden said in a statement. "We look forward to presenting our arguments to an appeals court, and believe they will agree that no sexual harassment took place and MSG acted properly."

"The normal operations of Madison Square Garden and the New York Knicks will continue unabated," the Garden added.

The harassment verdict was widely expected after the jury sent a note to the judge Monday indicating that it believed Thomas and the other defendants, Madison Square Garden and MSG chairman James Dolan, sexually harassed Browne Sanders, a married mother of three.

After the verdict, Browne Sanders hugged family members and friends gathered in the back of the courtroom. Thomas huddled with his lawyers, and was allowed to leave the Manhattan courthouse. Dozens of reporters and cameras surrounded him after he spoke outside the courthouse and got in a vehicle to leave.

Browne Sanders, fired from her $260,000 a year job in 2006, sued Thomas and Madison Square Garden. Her case presented the Garden as "Animal House" in sneakers, a place where nepotism, sexism, crude remarks and crass language were part of the culture.

The former Northwestern college basketball star characterized Thomas as a foul-mouthed lout who initially berated her as a "bitch" and a "ho" before his anger gave way to ardor, with Thomas making unwanted advances and encouraging her to visit him "off site."

Thomas, who was hired in December 2003, followed her to the stand and denied all her allegations. Attorneys for Thomas and the Garden also portrayed Browne Sanders as incompetent and unable to adapt once the former NBA star player arrived as the Knicks' president.

Thomas, who is married with two children, acknowledged trying to kiss Browne Sanders in December 2005, asking her "No love today?" when she recoiled. MSG president Steve Mills said he spoke with Thomas about the single incident, and the former point guard said it wouldn't happen again.

"There is no question Mr. Thomas can be charming and flash an engaging smile," she told the jury. "That does not give him the right to treat Browne Sanders like she is his woman."

Dolan, who testified before Thomas, said he dismissed the team's vice president for marketing and business operations after learning she was pressuring Garden subordinates to bolster her complaint.

In the punitive penalty phase, Vladeck urged the jury affix damages that send a message "to avoid this happening to somebody else."

She said the defendants had ruined her client's career, forcing her to move her family to Buffalo and go on a year-long job hunt that ended with a job paying less than half what she made before. She called Dolan a liar, saying he lied about the reasons for firing her and lied to the jury.

"Punishment for the sake of punishment is not what this is all about," he said.

The judge urged jurors to settle on a fair, just and reasonable amount using "calm discretion and sound reason."

The case, from its inception, proved a public relations disaster for the Knicks and the Garden, with intense coverage of the three-week trial focusing on its tawdriest aspects -- star guard Stephon Marbury having sex with an intern outside a strip club, raunchy come-ons from a Marbury cousin to his Garden co-workers, Thomas' videotaped remarks about the racial dynamics of calling a woman "a bitch."

"The World's Most Heinous Arena," read one New York Post headline about the case, WCBS-TV reported.

The trial did steer attention from the Knicks on-court woes as the team geared up for its second season with Thomas as coach. The Knicks finished 33-49 last year, and have yet to win a playoff game during the Thomas regime.