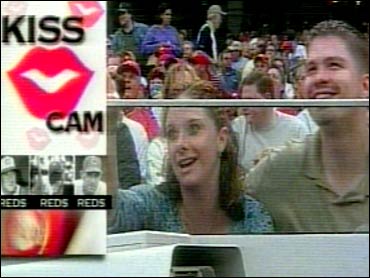 A wanted man was arrested after his parole officer spotted him kissing his girlfriend in a live crowd shot displayed on the scoreboard at a Cincinnati Reds baseball game.

David Horton and his parole officer attended the same May 7 game when the smooching couple were caught by the "Kiss Cam" at Great American Ball Park.

The parole officer and a police officer arrested Horton, 24, in his front-row seat.

"Out of all the coincidences, we had 20- or 30-thousand people at the ballpark and who do they put on the 'Kiss Cam'? And then, who is there but his parole officer?" said Richard Goldberg, Horton's attorney.

Horton, of Cincinnati, was convicted of felonious assault in 1999 for stabbing two men. He was granted release after serving two years of a four-year prison sentence.

Horton had been arrested March 27 and was indicted for trafficking and possession of cocaine. He is accused of failing to appear in court on those charges.

If convicted, he could face up to 18 years in prison.