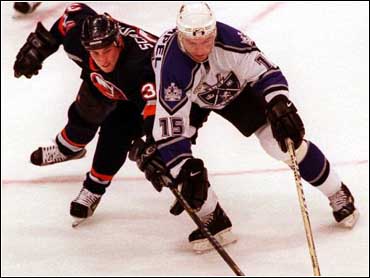 As far as the New York Islanders are concerned, Ziggy Palffy is on the outside looking in. The Los Angeles Kings leading scorer can't forget what he left behind.

"I've been there and I know how those guys feel," said Palffy, who tied a career high with three assists Monday night in the Kings' 5-2 victory. "They're trying their best every night, but it's very hard if you know what's going on in their locker room.

"It's tough being around there. If the organization is not trying hard, I don't think the players are going to try hard."

Luc Robitaille had two goals and an assist and Jozef Stumpel added a goal and two assists, helping build a 5-0 cushion against Kevin Weekes and end the Islanders' first three-game winning streak since April 1998.

"They had to trade me because their payroll had to go down," Palffy said. "I was the first guy put on the market after the season ended because the owners don't want to spend any money. I'd signed a new contract and they were trying to get rid of it."

Palffy, who led the Islanders in goals and points in each of the previous four sasons, also leads the Kings with 46 points. The three-point game was his fourth of the season.

"I would say he was a little more ready for this game than maybe some other ones," teammate Dan Bylsma said. "The only reason I say that is because he was dressed and ready to go out a little bit earlier than normal. Sometimes, that's an indication that you're excited to play."

Jamie Heward and Mariusz Czerkawski scored in the third period for the Islanders, whose 107 goals are the fewest in the NHL.

After Stumpel and Galley scored less than 2 1/2 minutes apart in the first period, Robitaille scored on a busted play less than two minutes into the second. He beat Weekes from 10 feet out at the left of the net after Stumpel's centering pass hopped off Palffy's stick in the slot.

Murray made it 4-0 less than four minutes later with his 16th goal and third in 18 games. His first shot from the right circle was stopped by Weekes, but Stumpel got the rebound and set up Murray in the slot with a behind-the-back pass.

The Islanders' collective frustration reached its peak when Steve Webb took a run at goalie Stephane Fiset in the right corner. Just 13 seconds after serving his charging penalty, he and Kings forward Ian Laperriere went off for fighting.

Another 46 seconds elapsed before Robitaille converted a rebound of Mattias Norstrom's shot for his second goal and 541st of his career, tying Hall of Famer Stan Mikita for 19th place on the career list.

Stumpel, who has missed 25 of the Kings' first 50 games this season because of injuries, opened the scoring at 14:50 of the opening period with his fourth goal. Robitaille slid the puck behind Weekes and through the crease, setting up Stumpel's easy tap-in.

Less than 2 1/2 minutes later, Kings center Bob Corkum won the draw from faceoff specialist Dave Scatchard deep in the Islanders' zone and got the puck back to Galley. He faked a slap shot at the top of the right circle, skated toward the middle and beat Weekes to the stick side with a 45-foot slap shot.

The loss kept the Islanders from sweeping all three games of a California trip for the first time, after beating the Anaheim Mighty Ducks 4-2 last Wednesday and San Jose 3-2 on Saturday night. Prior to this season, the Islanders were 32-26-13 in the state of California including an 11-4-3 mark against the defunct California Golden Seals.

"Overall I think it's been a pretty successful rod trip, and I do believe this team is heading in the right direction," Islanders defenseman Jamie Rivers said. "It takes time when you get so many new faces in a season, but guys are starting to get used to each other's personalities let alone how they play on the ice."