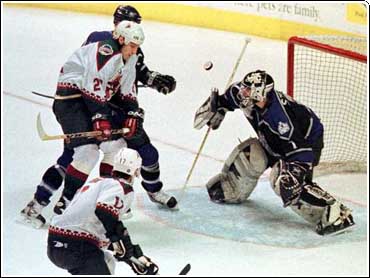 With his team in need of a lift, Los Angeles Kings coach Andy Murray turned to Ziggy Palffy.

Palffy, playing on double shifts for much of the game, scored twice and Rob Blake added a goal and an assist as the Kings rallied Wednesday night to edge the Phoenix Coyotes 5-2 for their third road win since November.

"We liked what we saw," said Murray, whose Kings are 3-10-2 away from home since opening the season unbeaten in 10 of 12 road games. "Any point is so big for us now. I haven't even checked to see what the other teams have done. We are focusing on what we need to do."

"I'm always happy if I can help in these games," Palffy said. "I need to play more. If I'm playing more and more, I'm more comfortable and more confident, like any player."

The victory was the Kings' fourth in 15 games against Pacific Division opponents (4-10-1) and their first since a 4-1 win over San Jose on Nov. 27.

Jozef Stumpel and Bob Corkum also scored for Los Angeles, which came off a 5-3 home loss to Anaheim on Tuesday.

Blake scored the game-winner with a power-play goal with 24.3 seconds left in the second period. Luc Robitaille carried the puck into the right corner, drawing the Coyotes defenders away from the blue line, before turning and passing to the trailing Blake. Blake blasted a one-timer over goalie Sean Burke's shoulder.

Keith Carney and Rick Tocchet scored first-period goals for the Coyotes, who squandered a 2-0 lead to lose their second straight at home.

"They brought it to another level and we didn't respond," Phoenix coach Bob Francis said. "When we had a two-goal lead, L.A. played more with a sense of urgency. The result is they get the two points."

Carney needed only 77 seconds to open the scoring, taking a pass from Dallas Drake on a 2-on-1 break and shooting past a sprawling Jamie Storr to give the Coyotes a 1-0 lead. Storr skated to the bottom of the right faceoff circle to challenge Drake and could only leap awkwardly at the net when the pass went across the ice.

Phoenix made it 2-0 at 8:06 of the period when Greg Adams redirected a Teppo Numminen shot from the point off Tocchet's upper torso and past a surprised Storr for a power-play goal.

"We really wanted to come out in the first 10 (minutes) and I thought we really did," Tocchet said.

But Palffy and Stumpel brought the Kings back when each was left alone just to the side of the net. Palffy scored from Burke's left for a power-play goal at 12:44 of the first and Stumpel scored from the other side just over five minutes later to tie it.

"It was a bad feeling and it's hard for a team," Palffy said. "But we came back and were strong. We had a strong attitude on the bench."

Corkum and Palffy sealed the victory with goals in the final six minutes.