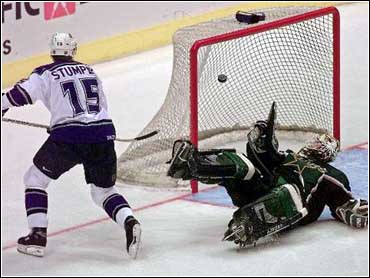 The Los Angeles Kings' victory over Dallas was extra special, since it was such a long time coming.

"It's a great feeling to finally beat them," said Los Angeles' Luc Robitaille, whose goal just before the buzzer ending the second period proved the difference in the Kings' 3-2 win Friday night.

It was Los Angeles' first victory over the Stars since 1995, a 22-game stretch in which Dallas beat the Kings 16 times and tied them six others.

Jozef Stumpel had a goal and an assist as the Kings also snapped the Stars' 11-game winning streak against them, including four earlier meetings this season.

"You could tell by the excitement of the fans that it meant quite a bit to them," Kings coach Andy Murray said. "It's my first year here, so I've only lost to Dallas this year."

"But our fans, some of the players who have been here for a while, and the management have endured quite a bit to get a win, so it is big."

Dallas coach Ken Hitchcock said that, although the outcome was different this time, the game was typical of many of the close contests the teams have played during the Stars' dominating streak.

"This time, they were just on the right side of a one-goal game," he said.

Stumpel put the Kings in front to stay when he scored 7:12 into the opening period. After Dallas closed to 2-1 early in the second period, Stumpel assisted on Robitaille's goal.

Aaron Gavey ha a goal and an assist for Dallas, which was unable to score with a two-man advantage for 1:16 of the first period.

"We were able to kill that 5-on-3 and then get a goal. That was the turning point," Robitaille said.

After the Kings went up 3-1, defenseman Richard Matvichuk trimmed the deficit to 3-2.

Gavey set up the goal, taking advantage when Los Angeles goalie Jamie Storr got caught out of position, trying to clear the puck from behind the net. Gavey picked up the puck behind the goal line, tried a wraparound that bounced off the goal post and slid to Matvichuk.

"We battled back, but we just ran out of time," Gavey said. "That two-goal lead was hard to overcome."

The Stars pulled to 2-1 on Gavey's second goal of the season, 5:55 into the second period. The score was set up by Jamie Wright, who skated behind the goal and threaded a pass between defenders to Gavey, who beat Storr from 15 feet.

Gary Galley put Los Angeles up 2-0 with 5:15 left in the opening period. Skating alone down the crease, Galley took a pass from Jason Blake on the right wing and beat Belfour from close range for his seventh goal.

Stumpel opened the scoring by finishing off a give-and-go with Ziggy Palffy. The pair skated down 2-on-2 with Dallas defenders, and Stumpel got behind Mike Keane as Keane converged on Palffy. Palffy passed to Stumpel near the left post and Stumpel chipped in his shot to run his goal-scoring streak to five games.

The 11 consecutive victories over the Kings tied the Stars' record against any NHL foe. The team also won 11 straight against Los Angeles from Feb. 24, 1971, through Nov. 25, 1973, while the franchise was still the Minnesota North Stars. The 22-game unbeaten streak against the Kings also was the longest in the Stars' history against any club.

The longest unbeaten streak in NHL history against one team is Montreal's 31-0-3 record against Washington from 1974-79.