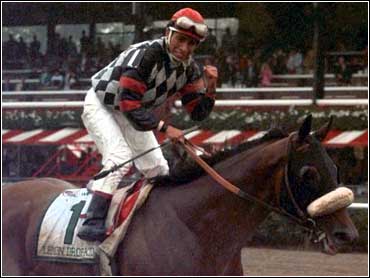 Lemon Drop Kid came from just off the pace Sunday to post a two-length victory in the 73rd running of the Grade I, $750,000 Whitney Handicap for horses 3-years-old and older.

It was the third consecutive win for Lemon Drop Kid, who had impressive wins in Belmont's Grade II Brooklyn and Suburban Handicaps.

In the Whitney, Cat Thief turned in a gutty show of speed and stamina to be second in the field of six. It was another 4 1/4 lengths to Behrens.

The order of finish was completed by Running Stag, Golden Missile and David.

Heavy rain began after the seventh race and continued through the remainder of the 10-race card, turning the main track from "fast" to "good".

Since Lemon Drop Kid had been never worse than third with two victories on wet tracks, the rain would seem to have been in his favor. But trainer Scotty Schulhofer later confessed that the weather had given him some concern.

"He (Lemon Drop Kid) is not at his best in the slop," he said, "and I was very concerned that it would get wetter. It was just wet enough."

With Edgar Prado at the controls as he was in the Brooklyn and Suburban victories, and carrying 123 pounds while conceding from one to nine pounds to his rivals, Lemon Drop Kid took a ground-saving position through the first haf-mile while a close fifth, never more than two to three lengths off the pace.

David and Cat Thief dueled for command through the first six furlongs, hounded on the outside by Golden Missile.

Behrens was close as well, having recovered nicely after encountering a traffic problem shortly after leaving the gate.

At the break, Lemon Drop Kid broke alertly to secure his position at the rail. Golden Missile also left the gate smartly from the third post. Behrens, between these two, appeared to clip Golden Missile's heals and stumbled, recovering quickly.

Jerry Bailey, aboard Behrens, later mentioned the contact, but didn't use it as an excuse for Behrens' third-place finish.

"Golden Missile and I were going for the same spot outside Lemon Drop Kid. It was a little tight, but I don't think it made the difference."

From there to the wire, it was a question of Lemon Drop Kid holding Cat Thief safe. This he did under a strong hand ride from Prado.

It was Schulhofer's third Whitney winner. He sent Colonial Affair out to take the 1994 renewal and repeated a year later with Unaccounted For.

"After Edgar (Prado) rode him at Pimlico and told me he saw the gate coming for home, we decided to put blinkers on him," said Schulhofer.

"He proved just what I've always thought: He's the best horse in America. He's the best horse I've ever trained. I've had a lot of good ones, but he's the best. It looks to me likhe's still improving, and from now on they run at equal weights. It looks like he's at the top of his game and all we have to do is keep him healthy and strong.