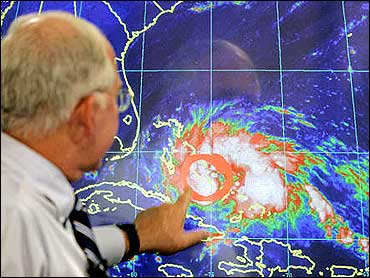 Officials ordered residents evacuated from the lower Florida Keys and extended hurricane warnings and watches to Miami-Dade and Broward counties as strengthening Tropical Storm Rita headed toward the Keys Monday, threatening to grow into a hurricane with a potential 8-foot storm surge.

Because Rita strengthened relentlessly and ballooned in size, forecasters said its winds could approach the 111-mph threshold of a major hurricane as the storm's core reaches — and possibly passes right over — Key West by Tuesday night.

"The National Hurricane Center is telling us that there is some risk that Rita might reach Category 3 status as it approaches the Keys," said Irene Toner, Monroe County's emergency management director. "Our policy is to call for a general evacuation in areas that might be prone to Category 3 impacts."

The evacuation covered 40,000 people living from below Marathon to Key West. Visitors were ordered to clear out of the entire length of the low-lying Keys, which are connected by just one highway.

Overnight Monday, Rita is expected to pick up speed and gain hurricane status, Dave Price reports for CBS' The Early Show. It could enter the Florida Keys with winds up to 100 mph and cause five- to nine-foot storm surges. But the problem is, there's no land to stop Rita from gaining strength as it barrels across the Gulf,

The weather was clear Monday morning but expected to deteriorate through the day with the approach of Rita's outermost bands of rain; however, the storm's eye was expected to pass between the islands and Cuba on Tuesday.

President Bush said Monday that there is "deep concern" about the possibility that Rita could drop more rain on New Orleans and breach the city's levees again.

Rita, which strengthened Sunday into a tropical storm, had sustained winds of 65 mph by late morning, up from 60 mph earlier in the day, and could be a Category 1 hurricane by the time it passes the Keys, the National Hurricane Center said.

By the weekend, computer models projected that it could be in the northwest Gulf of Mexico near Texas, but people in areas ravaged by Hurricane Katrina were warned it could veer in their direction instead. Katrina crossed South Florida into the Gulf last month, killing 11 people, before it turned northward to Louisiana and Mississippi.

Key West streets were quiet Monday morning as Mike Pettengill, 54, packed his Harley-Davidson motorcycle. A resident of Stuart, he hoped to beat the rain and traffic heading north and wanted to be able to find gas before stations close or run dry.

"We walked by a bar (Sunday) and heard there was an evacuation. We were totally shocked. I couldn't believe it. Where did it come from?" he said.

Kelly Friend and two workers were boarding up her store in Key West, Audio Video in Paradise Inc., and painted a message on the plywood: "Hey bartender 1 Rita on the rocks to go!"

"Not that we're afraid of the hurricane, but we want to protect our investment," Friend said. "Plus it gives us an excuse to take a day off and drink."

The state was sending a National Guard cargo plane to evacuate 22 patients from Key West's hospital to Sebring, near Lake Okeechobee. Several critically ill patients already had been evacuated to hospitals in Miami.

Rita is the 17th named storm of the Atlantic hurricane season. That makes this season already the fourth busiest since record-keeping began in 1851. The record is 21 tropical storms in 1933.

Six to 15 inches of rain was possible in the Keys, with 3 to 5 inches possible across southern Florida. A storm surge rising 6 to 8 feet above normal tide levels was predicted for the Keys.

"Right now the biggest concern is the Keys," said Max Mayfield, director of the National Hurricane Center in Miami.

Many schools were closed in the Bahamas on Monday as Rita's rain and wind moved through the islands.

"Last night wasn't very bad at all," said Samuel Miller, the commissioner of the southern island of Mayaguana.

At 11 a.m. EDT, Rita was centered about 195 miles southeast of Nassau, Bahamas, and about 430 miles east-southeast of Key West. It was moving to the west-northwest at about 12 mph, according to the hurricane center.

Farther out in the Atlantic, Hurricane Philippe formed late Sunday well east of the Lesser Antilles. At 5 a.m., Philippe had maximum sustained wind near 75 mph, and was centered about 385 miles east of the Leeward Islands. It was moving to the north near 7 mph.